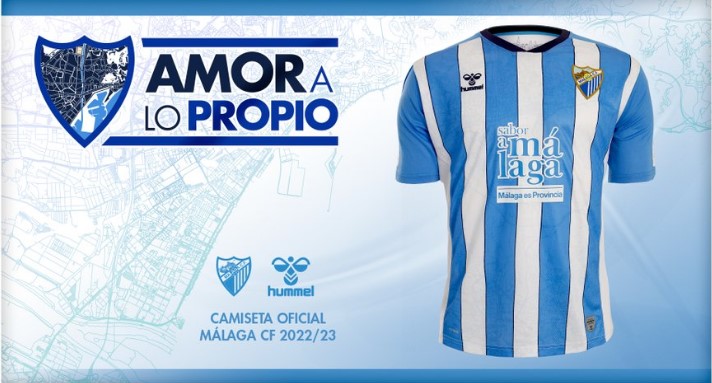 Image of the new Malaga CF shirt for the 2022-23 season. Credit: [email protected]

Hundreds of fans filled the Plaza de la Constitucion to witness the unveiling of this season’s new Malaga CF strip.

Malaga CF presented their new first-team strip for the 2022/2023 season on Thursday, July 7. The unveiling took place in the Plaza de la Constitucion, attended by hundreds of blue and white fans.

The club had already announced via its social media channels that Thursday’s presentation was not going to be a traditional one. This time, the fans themselves were going to be the protagonists of the act.

Eight city establishments with Blue and Whites fans had the privilege of wearing the shirt for the first time, displayed to the rest of the public via a giant screen. From their establishments, they set off towards the epicentre of the event and entered simultaneously. This created a real jubilant atmosphere that demonstrated the excitement that the Blue and Whites have for the season.

The jubilation was increased by the sudden appearance of three players. Captain Luis Muñoz was the first to present the complete kit to all the spectators. He was joined by Fran Sol, one of the new signings on loan from the Ukrainian side, Dynamo Kyiv. Then came Ruben Castro, sending the fans to another level of excitement as he promised to give everything “to return the team to where it deserves, the First Division”.

Francisco de la Torre, Mayor of Malaga, was in attendance, as was Francisco Salado, president of the Diputacion de Málaga. Javier Salas, the sub-delegate of the Government in Malaga joined them, along with Jose Maria Arrabal, General Secretary for Sport from the Andalucian government.

Malaga CF’s first-team shirt is not lacking in details in Hummel’s debut with the blue and white entity, and the exclusive design that they have developed. Most noticeable is that the blue is a lighter shade than the previous season, and there is a return to the wider stripes.

As in the previous campaign, the shirt bears the “Sabor a Malaga” logo on the chest, the Regional Council’s brand as the most visible element. To the right of the crest is the Hummel brand in black, as is the collar of the shirt, one of the great novelties with respect to those seen in previous years with Nike.

However, two fundamental details identify this latest kit with its city. The first, and more obvious of the two, is the addition of the coordinates of La Rosaleda to the shirt, the stadium where Malaga CF will fight to achieve promotion this season. Secondly, the phrase “One city-one club” is also emblazoned on the torso area.

This brand new shirt from Hummel will be available to purchase from all of the physical Malaga CF stores, and online, from 10am today, Friday, July 9, along with the training strip that is also available.