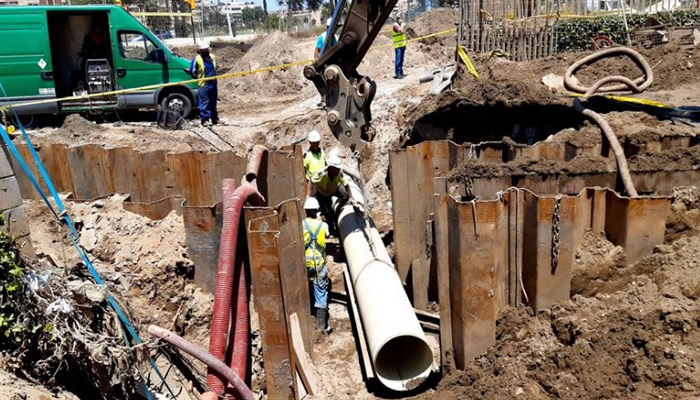 Image of the repair work carried out by EMASA at Sacaba Beach. Credit: [email protected]

After the flooding caused by a broken sewage pipe earlier in the week, Malaga’s Sacaba Beach will remain closed over the weekend.

Sacaba Beach in Malaga will remain closed over this coming weekend it has been reported today, Friday, July 8. A broken sewage pipe last Tuesday, July 5, resulted in the area that runs from the La Termica breakwater to the mouth of the Guadalhorce being closed to bathers.

The ruptured pipe flooded the immediate vicinity of the beach with raw sewage, which also reached the sea. It was expected that this Friday the result of the microbiological analysis of the water taken from Sacaba Beach would be known. Sources of malagahoy.es told them that it will be Monday, July 11, before any results would be returned.

Malaga Council had insisted from the outset that no contamination had been found in the samples taken by EMASA, and that the beach was only closed off as a precautionary measure.

EMASA announced on Friday evening that repair work to the broken pipe was completed and that the service of the EBAR wastewater pumping station has been restored.

Daniel Perez, the spokesman for the Municipal Group of the PSOE in Malaga, insisted this Friday that the Council should: “investigate the discharge of sewage that reached the sea on Sacaba beach, because it may have a responsibility in the criminal sphere for possible negligence”.

Mr Perrez indicated at the time of the sewage discharge that: “there is a health problem, and therefore, you cannot have an open beach for bathing and you have to seal it off immediately”.

He pointed out: “It is necessary to clarify responsibilities, and we want to know in-depth what the City Council is doing in this regard, and what the Health Delegation of the Andalucian Government, competent at this time of beach closures, is doing”.

“If we find that the sewage of 22,000 families is being poured directly onto the beach, then it will be necessary to see if there has been any type of negligence”, he continued.

The councillor added: “It is an extremely serious event because there are hundreds of families who have seen how they have lost their vehicles and belongings due to a breakage. It will be necessary to see how it has happened and if it has been acted on too late, especially in the case of having to close some beaches that are receiving discharges of sewage”.

Begoña Medina, the socialist deputy spokesperson, added that: “This situation has caused concern and inconvenience, due to odorous contamination among the residents of this neighbourhood because the sewage has ended up next to their homes and at the entrance of the beach”.

“We do not understand why this breakage has occurred, since when redevelopment actions are carried out and the pipes are opened on our public road, EMASA informs the company where the sewage and supply pipes are, with the aim that when companies have to drill they don’t break any pipes”, Medina pointed out.

The construction company that caused the breakage is the one taking charge of the clean-up operation. Its insurance company will also be the one to deal with any claims from the neighbours.