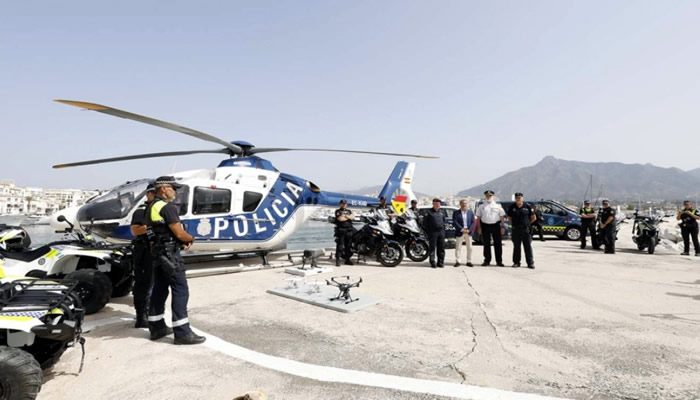 The special summer security operation has been presented in the Malaga city of Marbella.

Marbella City Council announced the launch today, Saturday, July 9, of its special summer security operation in the Malaga municipality. It includes the deployment of extra personnel, supported by the latest in cutting-edge technology. This involves a fleet of drones, along with more than 100 recently installed video surveillance cameras.

Jose Eduardo Diaz, the Councillor for Citizen Security, made the presentation in the municipality of Puerto Banus, accompanied by Javier Martin, the head of the Local Police, and Enrique Lamelas, commissioner of the National Police.

Mr Diaz emphasised that during the months of July and August both bodies “redouble their efforts to provide more coverage and peace of mind to citizens at points of maximum influx of people”. He pointed out that Puerto Banus “will be a priority”.

“We are a safe city where there is a quick and effective response to the commission of a crime”, he stressed. This has also had an impact on the “large number of visitors who come to the city and the important economic movement that takes place record”, he continued.

“In these two months, all the units have a maximum level of demand”, he pointed out. He thanked the officers of both security forces for the enormous effort they make on these dates. Specifically, the Local Police officers will perform 22,000 overtime hours during this high season. The National Police will be reinforced with 43 interns.

Diaz referred to the 133 video surveillance cameras that are already deployed and operational throughout the municipal area. They are linked to the two control rooms of the Local and National Police. “They will be constantly monitoring our hot spots with the addition of being able to supervise traffic and vehicles, a very important tool to dissuade the commission of crimes”, he assured.

Similarly, he alluded to the drone fleet, and the new intervention unit, “whose officers are uniformed differently and have a series of new tools to work on controls or the closure of establishments”.

Enrique Lamelas, from the National Police, detailed that the arrival of new personnel in the city “will allow the strengthening of the investigation and citizen security units”. A team of telemarketers will be launched to provide coverage to the cameras, and an operational response group, which will depend on citizen security he explained.

“Our objective is to increase services so that there is the greatest possible number of Zetas on the street”, he indicated. Regarding the most innovative technical means, he emphasised the drone unit with a thermal camera “that we use to carry out preventive surveillance at night”.

Javier Martin told of how the population “multiplies exponentially during the summer months in the municipality, which means that all police operations must be one hundred per cent able to serve all the needs that citizens require”.

He specified that: “We reinforce the units so that there is a greater police presence at times and areas with a high influx of people, from all units: traffic, intervention, citizen security, cavalry squad, quads, and operational services of drones”.