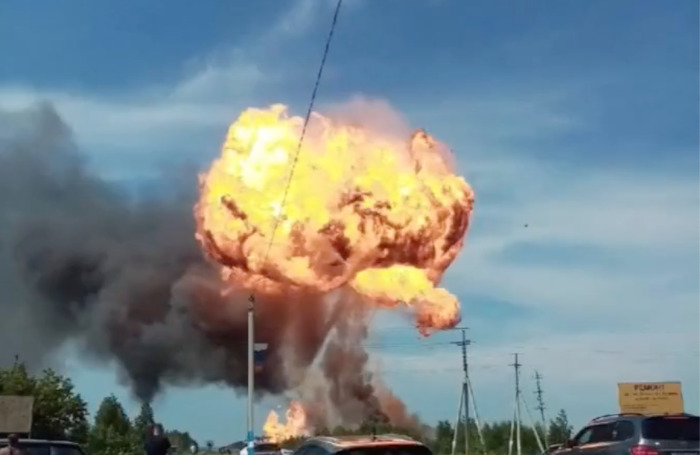 REPORTS have flooded social media on Sunday, July 10, of further injuries as a result of a huge explosion that happened in Ulyanovsk, Russia on Saturday, July 9.

Videos of the explosion have emerged on Twitter while the number of injured has risen after a fuel truck exploded at a petrol station in Kuzovatovo, Ulyanovsk, Russia.

The head of the region, Aleksey Russkikh, has now said that five people were injured due to the explosion. Two of them were hospitalised in serious condition with severe burns. One was hospitalised in a moderate condition and two refused to go to the hospital.

Original reports from Russia suggested that two people had been injured as a result of the explosion, however, this has continued to rise.

Following the blast, the prosecutor’s office in the Kuzovatovo district in Ulyanovsk launched an investigation into the explosion, which happened at around 4 pm (local time).

“In the course of supervisory activities, compliance with legislation on industrial and fire safety at the facility will be assessed. If there are grounds, necessary prosecutorial response measures will be taken,” the office said.

“The progress of this inspection, as well as measures taken by the investigating authorities, is under the control of the Ulyanovsk regional prosecutor’s office.”

This explosion in Russia following a house fire in Taganrog, Russia earlier this month which was caused after a drone crashed into it.

Reports on Monday, July 4 suggested a drone fell on a residential building in Taganrog Russia, east of Mariupol Ukraine and as a result, the building was completely burned out.