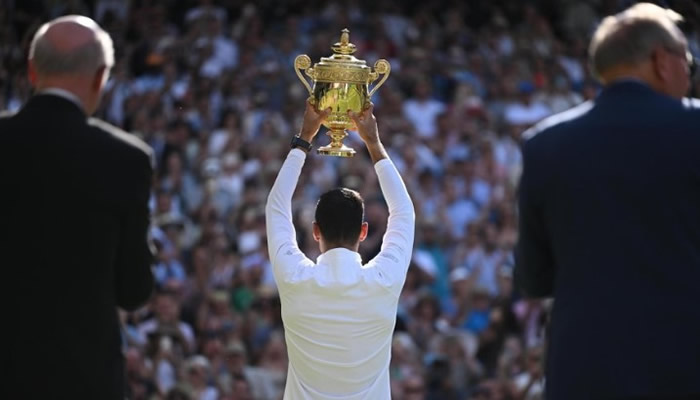 Today’s win – his 21st major trophy in a dazzling career – moves the 35-year-old Djovovic one Grand Slam title ahead of Swiss star Roger Federer. He remains one behind Spain’s Rafael Nadal, who he could have been playing today had he not pulled out through injury at the tournament’s semi-final stage.

A stunning opening by Kyrgios saw him take the first set, but Djokovic took control to win the next three sets, and the championship. As with most matches involving the fiery Aussie star, today’s was not lacking in controversy. A drunken fan had to be ejected from the centre Court for heckling him. He was also roundly booed by the crowd after producing an underarm serve in the first set.

The world No40 was appearing in his first Grand Slam final, after a great run of form. He seems to be surrounded by incidents though whenever he plays. As these two weeks have shown, Kyrgios is making headlines for the wrong reasons sometimes for his behaviour both on and off the court.

"It's been an amazing couple of weeks for me"@NickKyrgios has had an unforgettable run at The Championships 2022#Wimbledon | #CentreCourt100 pic.twitter.com/NSZybuzMIX

Although he picked up what is a record amount of winner’s prize money, Djokovic will lose his ATP World No1 ranking. He now falls to third due to the ban enforced by the ATP on Russian and Belarusian players this year. The sport’s governing body ruled that Wimbledon would not count for ranking points.

This could well be the Serbian star’s last shot in 2022 at increasing his total of Grand Slam titles. The US Open is on the horizon but there is a ban on unvaccinated players, so it is highly likely that he will not make the trip.

Nadal has already won both the Australian and French titles this year, but it remains to be seen whether he will be fit again for the US tournament. If he was declared fit then he has the chance to move even further ahead of his rival.