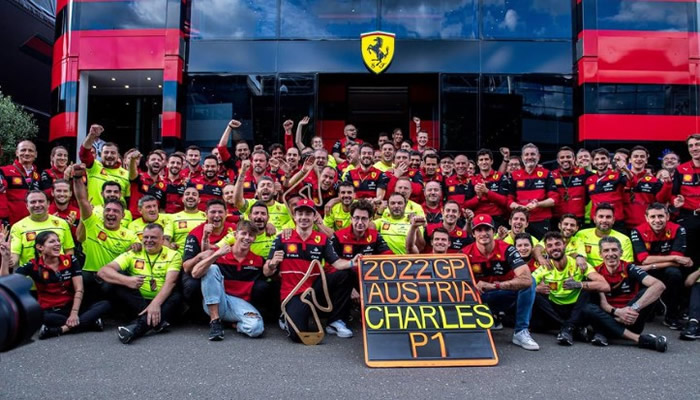 Ferrari’s Charles LeClerc has claimed victory in the Austrian Grand Prix after a spectacular race with Max Verstappen.

Charles Leclerc pulled a massive drive out of the bag to win the Austrian Grand Prix this Sunday, July 10. The Ferrari driver overtook current world champion Max Verstappen’s Red Bull a total of three times on his way to the chequered flag at the Red Bull Ring in Spielberg.

Sunday’s victory pulls LeClerc into second position in the drivers’ table, 38 behind the Dutchman, but leapfrogging Red Bull’s Sergio Perez in the process.

“Yes. Yes. I was scared. I was so scared”, an excited LeClerc was heard saying over the team radio after he crossed the line. “I definitely needed that one. The last five races have been incredibly difficult for me, but also for the team, and to finally show we have the pace in the car and can do it was incredibly important”, he added after exiting the Ferrari.

After the last 5 race weekends where everything went wrong, it feels so good to be back on top.
Feel sorry for Carlos as it should have been a 1-2.
Let’s keep pushing ❤️ pic.twitter.com/6GmF8rrw40

A dramatic final ten laps saw the Frenchman battling to hold the lead as he drove with a sticking throttle. Teammate Carlos Sainz fell victim to the problems that have cursed the Italian team this season as he pulled up with engine failure just 14 laps from the finish.

To add to his troubles, the Ferrari suddenly burst into flames, with Sainz still in the cockpit. He was unharmed as he was rescued from the burning racing car.

After starting from eighth on the gird, Britain’s Lewis Hamilton had another fine outing in the Mercedes to claim the third spot on the podium after the race. An incident on the opening lap saw George Russell’s car make contact with the Red Bull of Sergio Perez. The Mexican spun off into the gravel, for which the Brit picked up a five-second penalty.

Perez eventually retired but Russell completed a great drive by bringing his Mercedes home in fourth place behind Hamilton.

Verstappen had started on pole, and led for 10 laps until LeClerc pulled off a superb overtaking manoeuvre going down the inside into Turn Three. The Ferraris were clearly outpacing the Red Bulls, with the team changing its strategy and going for just two pit stops.

Emerging from his first pitstop 6.2 seconds behind Verstappen, within nine laps, LeClerc had caught and overtaken the Red Bull driver. The Dutchman headed into the pits three laps later, while the Ferrari stayed out for another 13 laps. Exiting the pits only 1.4 seconds behind, LeClerc was soon in the lead again after four laps.

Esteban Ocon continued a fine run of form as he took fifth in the Alpine. Mick Schumacher was behind him in sixth, crossing the finish line in the Haas for his highest position yet in his F1 career.

The McLaren of Lando Norris took seventh, ahead of Kevin Magnussen’s Haas, with Australian driver Daniel Ricciardo in ninth in the other McLaren. Fernando Alonso rounded out the top 10 in the Alpine after a stunning drive from last on the grid.