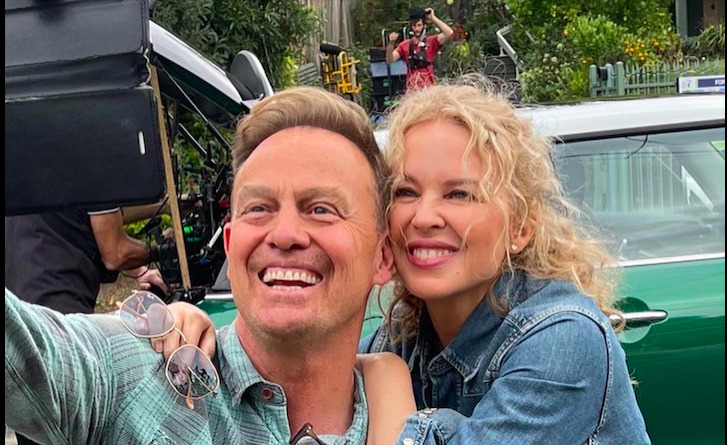 The first photos have been revealed of Kylie Minogue and Jason Donovan reuniting for their final scenes on Neighbours.

Kylie Minogue and Jason Donovan are on the famous Ramsay Street set one last time as they return to Neighbours before the show’s final episodes.

The long-running Australian soap opera will come to an end in the summer of 2022.

Television executives revealed Neighbours was to be axed due to financial restraints in February 2022.

UK network Channel 5 had fuelled the show financially in recent years but decided to drop it from its schedule to focus on other programming.

The show had previously been broadcasted daily on the BBC, with episodes airing at both lunchtimes and in the late afternoon.

We are so sorry to say that after nearly 37 years and almost 9000 episodes broadcast we have to confirm that Neighbours will cease production in the summer. pic.twitter.com/k3QV5J66qM

Following the announcement, it was revealed that several former stars would return to the show to appear once last time before the curtains draw to a close.

Minogue returned to the overalls she wore while playing mechanic Charlene Mitchell in Neighbours from 1986-1988.

Jason Donovan played the character of Scott Robinson and had an on-screen romance with Minogue that included a wedding before he also bowed out of the show in 1988.

Kylie Minogue and Jason Donovan had previously made a Neighbours reunion for a BBC Radio 2 show.

Both went on to have successful careers in the music industry following their time on Neighbours – a path later followed by the likes of Delta Goodrem and Natalie Imbruglia.

Actor Russell Crowe and actress Margot Robbie also starred in Neighbours before going on to find success in Hollywood.

Neighbours was first broadcast on the Australian channel Seven Network on 18 March 1985.

The show focuses on the lives of residents in the cul-de-sac of Ramsay Street in the fictional Melbourne suburb of Erinsborough.

Neighbours was first broadcast in the UK by the BBC in 1986 and stayed on the free-to-air service until 2008 when the show moved to Channel 5.

‘Now we’re back together’ @neighbours pic.twitter.com/fFoo2ndIfx