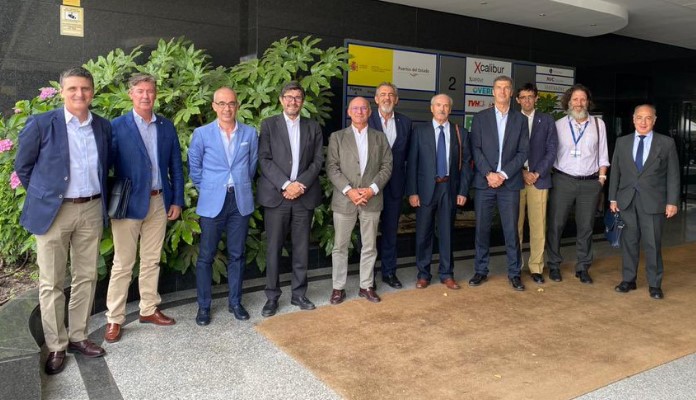 Carlos Rubio, the president of the Malaga Port Authority, accompanied by the director, Jose Moyano, held a meeting today, Monday, July 11, with Alvaro Rodriguez Dapena, the president of State Ports, in which they agreed on the 2022-2027 Business Plan.

During this meeting, a public investment of €101.7 million was approved. The most outstanding item was the creation of the new Dock 8, dedicated to the movement of goods, and the complementary works to carry it out.

This project, the most important in recent decades, plans to boost the logistics activity of the Port of Malaga with an investment of €32.5 million for the construction of the dock itself. Added to this must be the €6.1 million for the transfer of the fish market and the fishing berths, as well as the transfer of the official vessels. The objective is to leave space for the new logistics platform.

Another investment closely related to this project is the creation of a new access road bridge over the Guadalmedina River from San Andres, in addition to the existing railway bridge. This will cost €3.5 million and will make access for transport to the port area much easier.

Following one of the strategic lines of the Port Authority referring to its commitment to sustainability, the public body includes, as a novelty, an investment of €10 million to continue the Puerto Verde initiative.

After the execution of the first two phases, corresponding to the road landscaping of the transition areas between port activity and spaces for citizen use, and also the installation of photovoltaic canopies to increase the energy efficiency of the Port Authority, a third phase.

In this stage, the Puerto Verde initiative will focus on the development of specialized OPS (Offshore Power Supply) facilities. Specifically, this includes an electrical substation, the location of which has yet to be determined. The aim is to supply electricity to ships and reduce greenhouse gas emissions of CO2, SOx, and NOx in the port area.

In addition to the aforementioned investments, the Port Authority plans to refurbish La Farola and its surroundings, with a budget of €1.2 million. The corresponding transfer of maritime signage, which is currently in La Farola, will give greater visibility and will have an item of €1.5 million.

Finally, within the framework of the proposed investments, it is worth highlighting the completion of the new Guardia Civil building, with a budget of €1.7 million.

The projects approved in the Business Plan will undoubtedly represent an important transformation for the Port of Malaga. It will be able to consolidate itself as a catalyst for the region’s economy and as an integrated part of the Malaga capital’s surroundings.