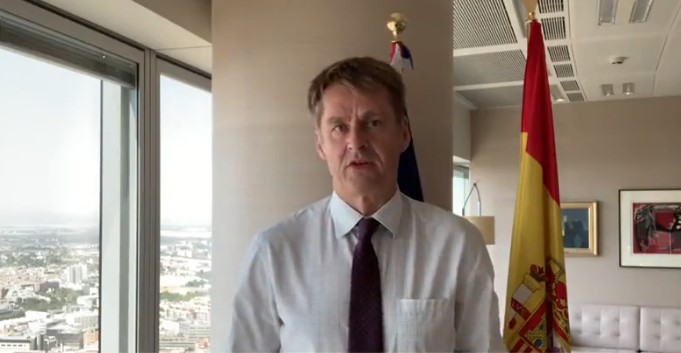 An update on the situation regarding the use of British driving licences in Spain has been given by Hugh Elliott, the British Ambassador to Spain.

Hugh Elliott, the British Ambassador to Spain and Andorra took to his official Twitter account @HughElliottUK today, Friday, July 15. He delivered a video message in which he gave a substantive update regarding the situation with the use of British driving licences in Spain.

Many British residents in Spain have fallen foul of the law change after Brexit, and find themselves unable to drive their vehicles as they had not exchanged their British licence before the deadline arrived.

Mr Elliott assured Twitter viewers that reaching a solution with the Spanish authorities was a top priority of his. With summer arriving the ambassador pointed out that he is all too aware that Brits living in Spain will want to be able to take their cars out and enjoy the weather.

He assured that this last week has been spent refining the text with the Spanish authorities. His office has been working through some legal clarifications that are needed before the full agreement can go for legal and political approvals.

Many people have been asking his office why the process is taking so long, and why it is not simply a case of performing a rollover of the pre-Brexit arrangements for example. Mr Elliott said he fully understood people’s frustration with the time it is taking, but that in reality, creating an international treaty is complex.

Only today, the ambassador’s office received some key documents from the Spanish, and he is expecting more to arrive early next week. Without being able to enter into a full explanation of the details, the ambassador pointed out that this is a good step forward. Unfortunately though, Mr Elliott was unable to offer a precise date when the agreement might be reached.

An agreement will definitely happen he said, and everybody was working towards making it happen as quickly as possible. Pointing out that he is fully aware of the situation some drivers find themselves in, the ambassador assured that his office does read every message that is sent to them, many of which he reads personally.

Affected people were strongly advised by Mr Elliott to look at local options that are might be available, and that those in very vulnerable situations should contact their consulate at gov.uk.

For those Brits in Spain affected, here is an update on driving licence negotiations and progress this week. pic.twitter.com/7US6JMgmpF