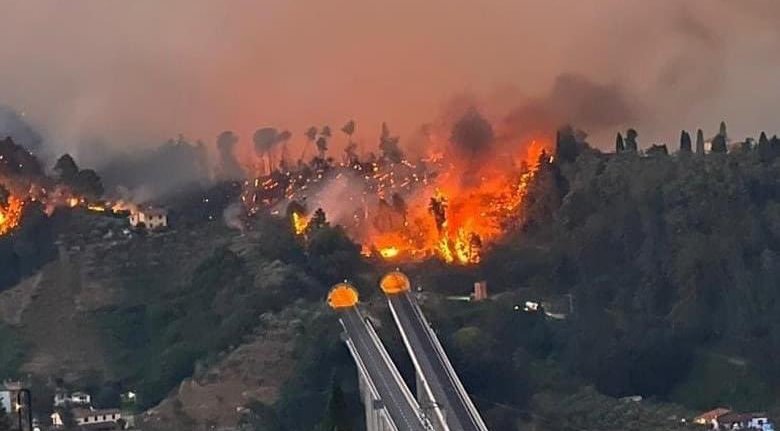 FIRE rescue crews are tackling the forest fire that broke out in the hills of Massarosa, a municipality in the province of Lucca, Italy late on Monday, July 18 and which has continued into Tuesday, July 19.

Videos circulating online show the extent of the fire in Italy’s Massarosa which has forced fifty people to be evacuated from their homes (forty of them during the night).

Regional President Eugenio Giani said that ‘this is a terrible fire’, about 100 hectares have been burnt.

“We are worried about the right front because of the wind that is rising,” he said.

“Over one hundred hectares of woodland gone up in smoke on the hills of Massarosa,” one news site in Italy tweeted.

“Closed the link road connecting the A11 with the E80 between Lucca and Viareggio. At work 4 Canadair, 4 helicopters and 60 units of the @vigilidelfuoco. The front of fire is powered by the strong mistral wind.”

A video released from the fire crews tackling the blaze showed the extent of the fire overnight.

Photos from the area show the devastating effect of the flames.

While others show the billowing smoke coming from the forest fire.

Further reports from Italy suggest that at least three buildings have been attacked by the flames, which led to the evacuation of the area., has risen to about 50 from the flames.

The mayor of Massarosa Simona Barsotti has been present on site all night to constantly monitor the situation.

The firefighters explained that “some families who had been evacuated are returning to homes where the vegetation was destroyed by the fire and are therefore safe, while others are being implemented due to the advancement of the fire front fueled by the fire. strong mistral wind.

“The motorway link connecting the A11 motorway with that of the E80 between Lucca and Viareggio is closed to traffic.

“The work carried out by the 4 Canadair and 4 helicopters is important and delicate, 60 are the fire brigade units in work, request for other units that will arrive from outside the region,” he said.