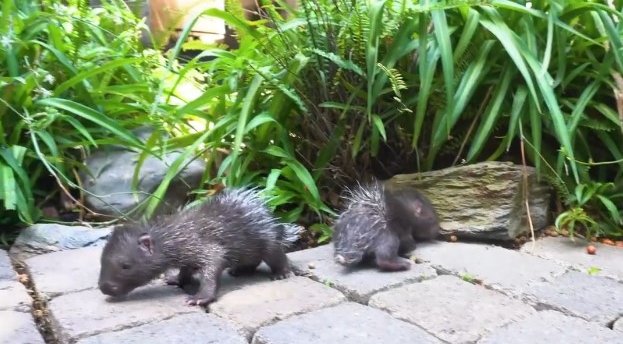 As reported by Bioparc Fuengirola via their official Twitter profile @BioparcF on Tuesday, July 19, the Malaga facility has acquired two new baby South African porcupine pups. The pair were born in Bioparc Valencia last week but as is quite common among first births in this species, the mother refused to rear them, so a decision was made to transfer them to the Costa del Sol.

Porcupine pups can often be abandoned by their mothers which, in their natural habitat in the wild, can often lead to their death. This species of porcupine from South Africa is the second-largest subspecies of this rodent mammal in Africa and also the second-largest porcupine in the world. They normally come into the world weighing around 300 grams each, and about 20cm in length.

At this young stage of their development, the pups need constant care and attention from the park’s staff. Data will be collected on a daily basis to record their weight, length, eating habits, stool control, naval inspections, and various other aspects of their behaviour.

This job has been tasked to the Bioparc Fuengirola Exhibition team, which will assume the hand-feeding of these little ones. In a few months’ time, they will be mature enough to eat other foods, such as vegetables or fruits, without the need for assistance.

For the time being though the pups must be fed from small bottles every two or three hours, day and night. This serves the purpose of providing them with maximum well-being and facilitating their growth.

These first weeks of life are crucial for the newborn’s survival. Not only will the staff have to feed them, they must also act as a mother. This type of close care and attention is known to act as a bond between the creatures and humans that generates an increase in the animal’s welfare at a young age.

Porcupine pups are born relatively well-grown. Their eyes are open and they already have teeth. When they are first born, their spikes are soft, to facilitate the birthing process, but they quickly grow harder on contact with the air. The pups should reach full size in about 12 months.

By this time, they have also reached sexual maturity. Female porcupines initiate copulation by presenting themselves to the males and the subsequent gestation period lasts around 94 days. The mother can give birth to at least three pups.

South African porcupines (Hystrix africaeaustralis) – or the Cape porcupine – are registered as an endangered species and are included in the Red List of the International Union for Conservation of Nature (IUCN). Although the number of individuals is stable, serious threats lurk over their existence in their natural habitat. Farmers consider them harmful to their crops.