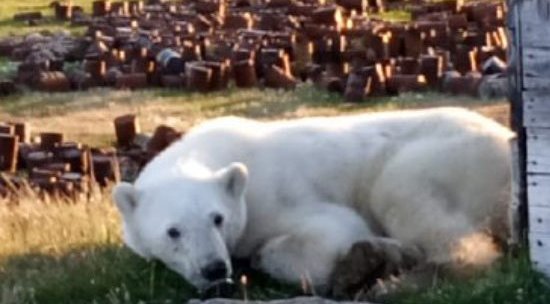 Moscow has sent veterinarians to help save a polar bear in Russia’s Krasnoyarsk region, that has a can of condensed milk stuck to its mouth, as reported on Wednesday, July 20.

Video footage of the polar bear Moscow veterinarians are flying to Krasnoyarsk, Russia to save, has been shared on Twitter:

“A polar bear with a metal can stuck in its mouth came to the Krasnoyarsk region for help.”

To which another user responded: “Let me know when the epic is over, my heart aches for shaggy…”

The case of the polar bear in Russia’s Krasnoyarsk was reported by the head of the Federal Supervisory Natural Resources Management Service, Svetlana Radionova, as reported by Vesma.

She said that in the village of Dixon they could not get the dangerous object out, so veterinarians from Moscow are set to fly in to save the animal.

“We have to save the red-listed animal, which is on the verge of death. We are urgently convening a meeting of the working group. We have already found specialists: today veterinarians will fly from Moscow to help the animal. Now we’re solving the question of transport,” she stated.

“We will have to immobilise the animal to remove the can, and we will issue an immediate permit for this. We will do everything possible to save the bear,” she added.

Locals had reportedly attempted to help the animal, but had been unsuccessful.

The news of Moscow sending veterinarians to Russia’s Krasnoyarsk to save a polar bear, follows reports of a walrus found behind a boat on the shores of Hamina in Finland, in an incident described as ‘extremely rare’ by a local fire chief.