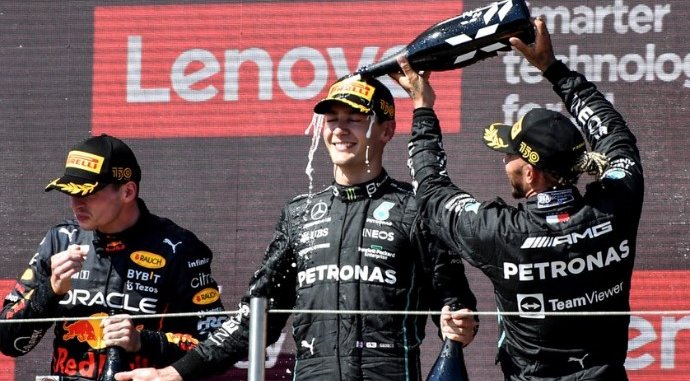 Image of the driver's podium at the French Grand Prix. Credit: [email protected]

Max Verstappen increased his lead in the F1 driver’s championship by winning the French Grand Prix at the Paul Ricard circuit.

Reigning F1 world champion Max Verstappen won the French Grand Prix at the Paul Ricard circuit in Le Castellet this afternoon, Sunday, July 24. In the process, the Red Bull driver roared into a commanding 63-point lead at the top of the driver’s table. LeClerc had originally led by 46 points after the first three races of the season.

Whether he would have won the race if Charles LeClerc hadn’t spun his Ferrari off the track while out in front is anybody’s guess. The Ferrari driver had started from pole position and weathered the Dutchman’s attempts to pass him.

It all went wrong on Lap 18 as the Frenchman lost control at the Beausset double right-hander and spun into the tyre wall at around 100mph. His attempts to put the car into reverse failed and his race was over. “I can’t go on the throttle”, LeClerc was heard saying over the team radio, which was shortly followed by a long scream of what was surely pure frustration.

In fairness to the Ferrari driver, he later admitted his own fault in causing the crash. “Just not good enough. I am performing at a very high level since the beginning of the season but if I keep making these mistakes it is pointless to be performing at this high level, I will try to get better but this is not good”, he commented.

🗣 Charles Leclerc shares his dismay following his crash out of the lead #FrenchGP #F1 https://t.co/NDBdNQEvKi

With LeClerc out of the picture, Max Verstappen took the lead and was never in danger of relinquishing it. The two Mercedes drivers performed superbly to claim the other two spots on the podium. Lewis Hamilton was elated with second position in what was his 300th F1 race. George Russell displayed what must be a future world champion type of drive to finish in third.

Left it all out there today and P2 is a great result! First time up there with @GeorgeRussell63 as well. It’s so rewarding to see how far we’ve come since the beginning of the season. Still have work to do, but definitely going to enjoy this one !!! pic.twitter.com/64WH9bZX2g

That was a cool race!! Mega happy to be back on the podium after some hard battles and even better to make it a double for @MercedesAMGF1 with @LewisHamilton. Let’s keep pushing, team. 👊 pic.twitter.com/EwcavVpTdk

The Brit endured a dramatic and often ill-tempered battle with Red Bull’s Sergio Perez over the last few laps, with the Mexican being temporarily shunted off the track in one tussle.

Carlos Sainz proved his immense skill once again, bringing the other Ferrari home in fifth, after starting from the back of the grid.