Ferrari speak out about their French Grand Prix disappointment 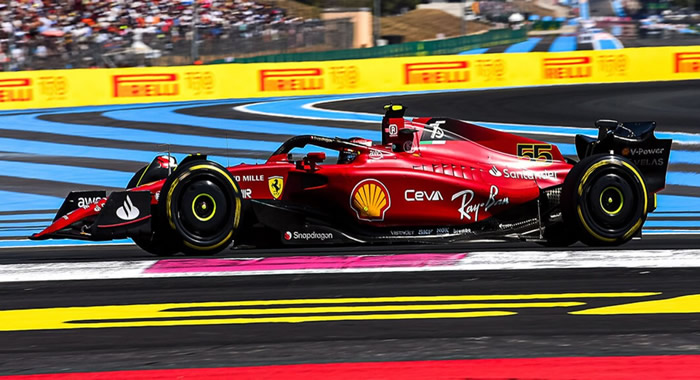 Image of a Ferrari car at the French Grand prix. Credit: ferrari.com

The Ferrari drivers and Team Principal offer their thoughts on the disappointment suffered at the French Grand Prix.

As reported by ferrari.com today, Monday, July 25, Scuderia Ferrari had mixed feelings at the end of the French Grand Prix yesterday, Sunday, July 24. On the one hand, Carlos Sainz put on a great show, moving through the field from 19th to fifth, but on the other, Charles Leclerc retired while leading, and looking on course to secure his fourth win of the season, when he crashed at turn 11 on lap 18.

Next up on the F1 calendar is Budapest for the Hungarian Grand Prix next Sunday, July 31. After that, the teams take their usual summer break.

Speaking after Sunday’s race, Carlos Sainz said: “It was a hard race today, but I also enjoyed going through the field, making lots of overtakes. To make places up with the Hards was tricky but as soon as I put the Mediums the pace improved a lot and I managed to make good moves”.

He added: “I gave everything out there today and, even though we were a bit unlucky with the pit stop and the penalty, we managed to fight at the front. Like always, we will review everything these couple of days to see where we can improve and hopefully we can bring home a better result before the summer break. A pity for Charles as he was doing a great race. We’ll keep pushing”.

His teammate Charles LeClerc continued: “I’m very disappointed. This is not the outcome that I wanted today, as we had the pace to win. I made a mistake and paid the price for it. Now I will head home to reset before the next race in Hungary, where I will give it my all once again”.

Mattia Binotto, the Ferrari Team Principal & Managing Director had this to say: “Although this result was far from the one we wanted, there are still some positives to take away from this race. First of all, the F1-75 was very competitive, even on this difficult Paul Ricard track. There is no point in dwelling on Charles’ mistake. These things can happen, even to great drivers like him and together, we have already put it behind us”.

“Carlos had a strong weekend, starting with qualifying, when he did what was required of him for the team. In the race, he was patient in the early stages and then made up places lap after lap, including some brilliant overtaking moves. Now we look ahead to Hungary where we want to fight for the win once again”, concluded Binotto.