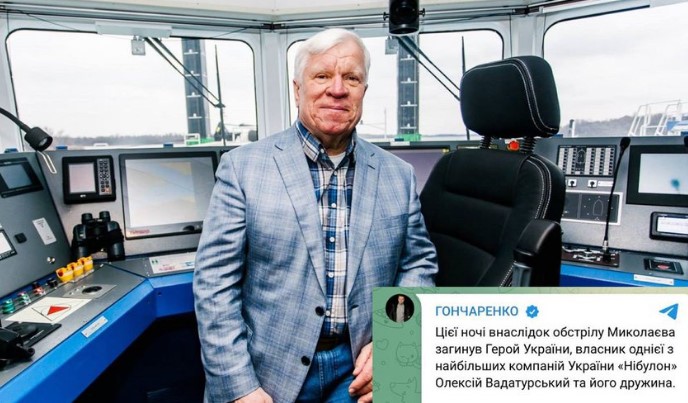 Oleksiy Vadatursky, a grain tycoon ranked by Forbes as Ukraine’s 24th-richest man, has been killed, along with his wife, in a Russian missile strike on the city of Mykolaiv.

According to Ukrainian authorities, 74-year-old Oleksiy Vadatursky, a grain tycoon, was killed, along with his wife Raisa, in the early hours of Sunday, July 31, in a missile strike on the city of Mykolaiv. Forbes ranked the agricultural magnate as the country’s 24th richest man, with an estimated wealth of $430 million (€420.9m).

A Russian missile reportedly hit their home overnight, killing them both. Vadatursky was the owner of the Nibulon group, a company involved in exporting wheat, barley, and corn. It is the only agricultural company in Ukraine with its own fleet and shipyard.

If local reports are correct, it is believed that only two people died as a result of the missile strike, a direct hit onVadatursky’s home. Should this be the case then it hints at what could have been a targeted attack on the grain magnate.

The grain tycoon had previously received the ‘Hero of Ukraine’ award in 2007 from Ukraine’s then-president Viktor Yushchenko, the highest honour that any citizen can be given in the country.

My husband gave Oleksiy Vadatursky the award Hero of Ukraine in 2007 for his vast contributions to the development of Ukrainian agriculture. Yesterday, the Russians murdered him and his wife. https://t.co/ALLBzMvcFj

Posting on Telegram, Oleksandr Senkevych the mayor of the southern city of Mykolaiv reported that the Russian attacks had been the most ferocious yet. They damaged homes, a hotel, two schools, a petrol station, and a sports complex.

Mykolaiv is located on the main route to the port of Odesa, and has been under regular bombardment by Russian forces recently. It is now the closest Ukrainian-occupied city to the southern front from where the country’s military is believed to be planning to launch a counter-offensive to reclaim the territory lost in the region, as reported by dailymail.co.uk.