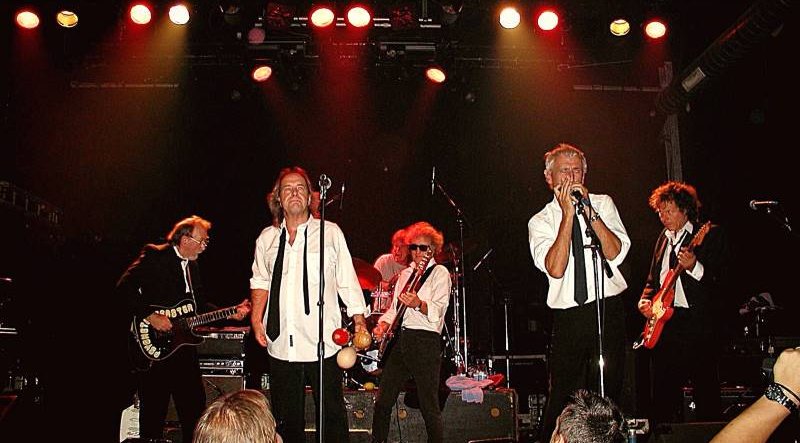 The Pretty Things in 2006 with Wally in dark glasses

Formed in the early 1960s, they were known as the rougher version of the Stones and whilst having a few hit singles it wasn’t until Wally Waller and John Povey joined them from the Fenmen in 1967 that they took a more psychedelic and underground direction.

The first major release for the new band was SF Sorrow recorded at Abbey Road at the same time at The Beatles’ Sgt Pepper and Pink Floyd’s Piper at the Gates of Dawn with production by Norman (Hurricane) Smith.

Bass player Wally Waller was involved with writing every track on the album along with his childhood friend, the now deceased Phil May and because it predates Tommy by the Who, many argue that this was the first true rock opera.

Parachute was also recorded at Abbey Road and again Wally (real name Alan) had a hand in the writing of each track on the album.

Jump forward 50 years and although many members of the band had come, gone and returned, four of the five who recorded Parachute decided to revisit one of their favourite albums and give it a new treatment.

Speaking to Euro Weekly News, Wally said “gone were the days of spending weeks in the comfortable surroundings of Abbey Road at record company expense, so we had to look elsewhere.”

Elsewhere turned out to be Malaga where keyboard player John Povey had moved to and he had a friend, John Woods, who had a great studio where they could record.

The four friends (minus Phil May who couldn’t make the journey at the time) decided not to listen to the original but to try to recapture the 1970s vibe by living together as if they were still a young touring band.

The result was Parachute Reborn by the xPTS which kept the original feeling of the album but built on it to give a new vibe to the whole sound.

Since then, it has received further editing and this year it has been released in vinyl as Parachute Revisited which Wally says has a great sound.

Now 78, Wally speaks happily of his time not only with the band but also as a much in demand record producer and happily recollects that the Pretty Things appeared in two unusual films, firstly What’s Good for the Goose starring Norman Wisdom who plays a 50-something assistant bank manager who discovers psychedelia.

“He was a lovely man and although the studio had supplied him with a supposedly trendy wardrobe, he took a liking to some of the clothes I was wearing and he took to borrowing them for the filming.”

The other film was a Hammer Horror type movie called the Monster Club starring Vincent Price and the band which also recorded movie soundtrack albums under the name of Electric Banana for De Wolfe records were asked to write and perform the title song.

Having spent years playing, producing, travelling the world and living in the South of France, Wally is still working, having just released an album of new and older numbers which he recorded during lockdown on Bandcamp.

He’s itching to get back on the road with another band and said “if that comes off, I would love to get back to Spain once again.”

Thank you for reading ‘British band The Pretty Things received acclaim from Rolling Stone’ and remember that all articles produced by Euro Weekly News may be accessed free of charge.