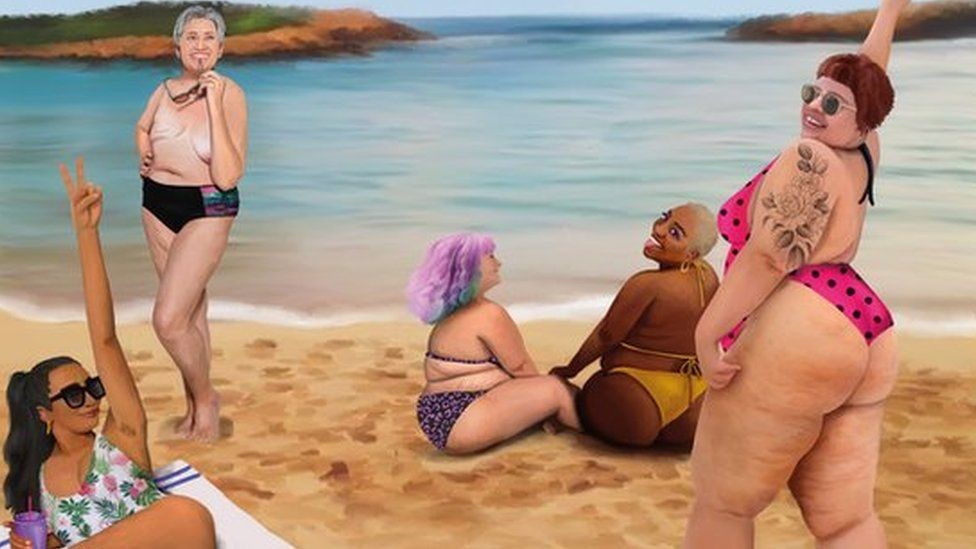 In an interview on Radio 1 Newsbeat a spokesperson for the Spanish government said: “We would like to make it clear that at no point was it aware that the women in the images were actual real people.

“The work contracted was for an illustration without the use of any models.

“Therefore, the Women’s Institute, as a concerned party, has been in touch with the models to clarify the situation, and is waiting for the illustrator and the models to reach an agreement.”

The explanation is however not being bought by the models involved who all agree that they would have been willing participants had the ad been produced in the usual manner, which would be to contract with the models or their agents and then to arrange an appropriate photo shoot. However, none of them was contacted and it is clear who they are from the illustrations.

Questions to be answered

It is clear from what has transpired that those standards and practices were not adhered to. The question is was this handled by an inexperienced person within the Woman’s Institute, and who is the design agency? From the quality of the images, it is clear this is not a professional outfit accustomed to working at ministerial level.

All quality design agencies follow accepted standards and practices within the sector, which include meeting data and image protection laws.

In the normal course of events, once the budget is given the go-ahead the marketing department would allocate the work to a campaign manager who would then choose from an agency from the government’s approved supplier list (the cost here would not warrant going to tender with most government’s undertaking regular tendering process to produce an approved list of suppliers).

They would then be briefed, after which they would develop and present concepts. Once agreed those concepts would be worked up into a full campaign, which would come back for proofing and ultimate sign-off by the campaign manager. However, where a minister is involved standard practice would be to run the artwork via them or their representatives.

In this case, it looks like much of that process was bypassed with the ads amateurish and having broken many basic design rules and legal requirements.

Watch this space – there is more to come.

UPDATE 19.33 pm (August 1) – Opposition parties in Spain have called on the government to withdraw the “Summer is ours” ad campaign saying it is ruining the country’s image.

Calling for a thorough investigation into the implementation of the campaign, the PP and Cuidadanos have urged the Minister for Equality, Irene Montero, to “apologise” for the campaign that her Ministry has launched without the consent of the people who appear in it and demands that she withdraws it in order “not to continue spoiling the image of the country.”

A press conference by the PP’s Deputy Secretary of Economy, Juan Bravo, said the €84,000 campaign (their own figures) failed to promote a summer “without stereotypes” and “aesthetic violence.”

He said: “A campaign against stereotypes in which the part of a disabled woman is hidden, I certainly do not think it is the best…, so we propose that you apologise, remove the campaign and make another one so as not to continue to spoil the image of our country.”

Finishing he said: “We demand a full explanation.”

Ciudadanos has launched a bid to have the whole issue investigated to find out why it did not go tender, who decided to launch the campaign, who approved the artwork and who was responsible for using models without their consent.

The party said it “evident” that the campaign “has neither fulfilled its objectives nor has it been carried out in the most transparent way.”

It has turned out to be “rather counterproductive”.

UPDATE 11.10.pm (July 31) – Serious questions are now being asked as to how a third woman used in the “Summer is ours” ad campaign could have also come to be doctored.

Juliet FitzPatrick, a breast cancer survivor who has had a mastectomy, thinks the woman in the advert may have been based on her.

She told the BBC that the production of the advert “seems to be totally against the theme of the campaign.

“For me, it is about how my body has been used and represented without my permission.”

Photgrapher Ami Barwell told the BBC she suspects the body in the poster was lifted from her picture of another woman. She said: “I think that the person who created the art has gone through my gallery and pieced them together.

“But without any clarification from the artist, I can’t say for absolutely certain.”

UPDATE 3.30.pm (July 30) – A second model has criticised the summer campaign which was supposed to promote equality and body positivity on the beaches of Spain.

This time the British model Sian Green-Lord has posted pictures showing that her image was edited, with the producers of the adverts removing her orthopaedic leg and adding hair to her armpits.

She said: “I don’t even know how to explain the amount of anger I’m feeling right now.”

The campaign is turning into a major own goal for the Women’s Institute and the government, with what was supposed to be a positive campaign now turning into a farce with a number of schoolboy errors having been made. Such is the gravity of the errors it is quite possible that the campaign will have to be pulled completely or replaced with new images.

Either way, it is a costly embarrassment that will have had completely the wrong outcome to what was intended.

UPDATE 5.32.pm (July 29) Spain’s government’s latest campaign featuring five women of very different shapes and sizes, has come under fire after a British model was included in the campaign without her permission.

British model, Nyome Nicholas was outraged when she saw the government of Spain’s latest campaign that had used her image without permission.

“So I’ve just been sent this…my image is being used by the Spanish government in a campaign but they’ve not used to ask my image or likeness! Great idea but poor execution! ASK to use my image @bbc you could of at least tagged me! Thank you @amymanktelow for bringing this to my attention. @ionebelarra”

“This is now the second time this has happened to me! It happened in 2020 when an illustrator used my likeness to sell products. The thing is I’d never say no if it’s for a good cause but come on, ask for my permission. This is so frustrating!”

“Anyone know of anyone I can contact to sort this, please DM me!!”

The artist in charge of the Spain’s government campaign took to Twitter to issue a public apology stating:

First of all I would like to publicly apologise to the models for having been inspired by their photographs for the campaign “El verano también es nuestro” and for having used an unlicensed typeface (thinking it was free.)

“I hope to be able to solve all this as soon as possible, I assume my mistakes and that is why I am now trying to repair the damage caused, for the moment I am going to stay away from social networks and try to solve this matter with the parties involved privately,” concluded the artist.

Original: 10.31.pm (July 27) The naked truth is that “every woman’s body is beach ready” according to Spain’s Equality Ministry who today Wednesday, July 27 launched a campaign that encourages women to make summer theirs.

Headed “summer is ours too,” the campaign encourages body positivity and the enjoyment of the holiday season no matter who you are.

She continued by saying that all bodies had validity and glorifying perfect bodies did little more than erode the average women’s self-esteem. That belief is why the Institute took the idea to the government who agreed to back the campaign.

In a big move away from the typical beach advertising campaign featuring young healthy and sexy-looking women and men, this campaign features five different women relaxing on the beach including a topless woman who has had a mastectomy.

The ad says that all women should enjoy the summer, however, wherever and with whoever they wished. “Today we toast a summer for all, without stereotypes and aesthetic violence against our bodies.”

As always a bold campaign such as this one has not received the support of everyone with left-wing politician Cayo Lara saying the campaign was the height of absurdity, trying to “create a problem where it doesn’t exist.”

That view, however, wasn’t supported with Junior Equality Minister Angela Rodriguez Pam tweeting to those men who believed women didn’t need approval to go the beach: “Of course we go, but we’re assuming we’ll attract hatred for showing a body that isn’t standard.”

Whilst the debate has yet to kick off locally, there is some concern that the ad may be a stretch too far for countries whose advertising standards are more sanitised and wouldn’t show nudity.

Whatever your view, the naked truth is that “every woman’s body is beach ready” and the department should be commended for reminding us all of that fact.