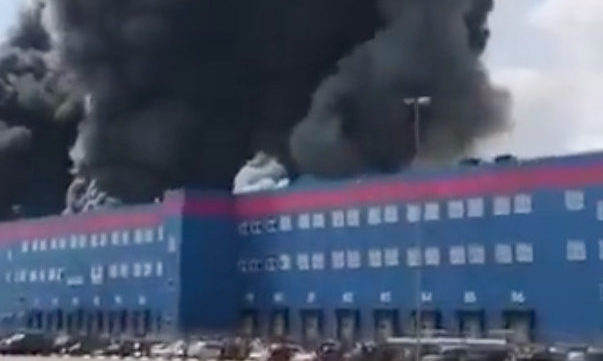 The OZON warehouse in Moscow Russia, has caught fire with over 1000 people being forced to evacuate, as reported on Wednesday, August 3.

Videos of the OZON warehouse catching fire in Moscow, Russia have begun to circulate on Twitter with one user posting:

“The OZON warehouse is on fire in the Moscow region. Video from social networks.”

⚡️ The OZON warehouse is on fire in the Moscow region. Video from social networks. pic.twitter.com/bffiz6ZrTO

“Government publication, Russia. A fire broke out at an Ozon warehouse in Istra near Moscow, the Russian Ministry of Emergency Situations said.”

Moscow, this is not ammunition depot, but only the largest warehouse of the Ozon online store.
The fire area is 20 thousand square meters, 1000 people evacuated.
There were no reports of casualties. pic.twitter.com/VIYyUaU2bA

“And this is how the fire at the OZON distribution warehouse started. At the moment, the area of the fire is 20,000 square metres.”

According to preliminary reports the fire in the suburbs of Moscow at the OZON warehouse located in Novaya Riga has seen over 1,000 people  evacuated, with part of the roof reportedly collapsing.

According to OZON representatives all employees have been evacuated.

Emergency services have rushed to the scene of the incident. The cause of the fire is currently unknown.

Established in 1998 as an online bookstore, OZON is one of the first e-commerce companies in Russia, often referred to as “the Amazon of Russia.”

In addition, sellers are now reporting that OZON has introduced a new compensation scheme for damaged goods, according to Russian news agency Baza.

OZON has reportedly suddenly added a new section on product protection to its clients. According to this update, a seller can claim compensation from the company for any products damaged during storage.

To do so, all they have to do is apply for the appropriate service on OZON.

However, the “Product Protection” is only available from August 4 and according to the sellers, notifications have only begun to be sent to them now that the company’s distribution warehouse in the Moscow region is on fire.

The company has only given a 24-hour notice of the new rules according to sellers.

The news follows reports of a huge fire that broke out near Lakeside Shopping Centre in Essex, UK, as reported on Wednesday, August 3.