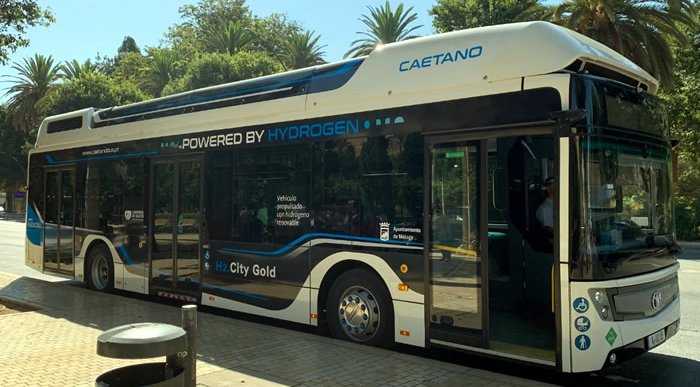 These two vehicles will cost €1.5 million, but before that happens, EMT has acquired one vehicle on loan. This will enable the company “to test it, see its consumption, its efficiency, and how it adapts to the operation of the EMT during a month-long trial”, commented Francisco de la Torre, the mayor of Malaga.

Malaga’s mayor took a test ride around the city today in the new H2. CityGold. He was accompanied by Jose del Rio, the Mobility councillor, and Susana Carillo, the councillor for Innovation and Digitisation. “In principle, it is the most efficient, and does not pollute at all”, stressed the mayor.

He pointed out that 12 vehicles with electric and combustion engines will be added to the fleet of 25 hybrid buses “in the next few days”. Hydrogen vehicles, the mayor continued, are kinder to the environment to the extent that it is produced from renewable energy, the so-called ‘green hydrogen’.

With this purchase, and the new ones to be carried out with Next Generation funds, Malaga’s public transport fleet will have 59 new generation ecological vehicles in the short term. This will reinforce its position as a benchmark in sustainable mobility.

The test vehicle, H2. CityGold does not have a combustion engine and works using the energy provided by a fuel cell that transforms green hydrogen into electricity. That in turn is recharged from a hydrogen generator or hydrogen dispenser, provided by the company Carburos Metalicos, which facilitates the necessary autonomy.

This model is capable of working for a whole day making use of all the functionalities and features of modern buses such as panels, screens, and air conditioning.

The vehicle manufacturer has chosen Malaga, with its EMT fleet, as one of the first cities in Spain to show the future of mobility in urban transport. It reinforces the Council’s commitment to the incorporation of new technologies in management in general, such as smart city, and in passenger transport, in particular.

There are zero emissions with this hydrogen bus since the only residual product is water vapour, which is expelled through the exhaust pipe. It represents a qualitative leap since autonomy limits are eliminated as a result of the capacity of the batteries that were incorporated in the first generations of electric buses.

The H2. CityGold operates from an electric motor that develops a nominal power of 180 kW. It has three batteries with a capacity of 44 kWh each and offers a range of at least 400km. That allows the bus to complete a working day. Another significant feature is that it moves silently.

Its charge is carried out in a totally safe way from a portable hydrogen generator that supplies renewable hydrogen for refuelling the bus. For this purpose – during this test – the EMT has hired Carburos Metalicos, which is part of the Air Products group.