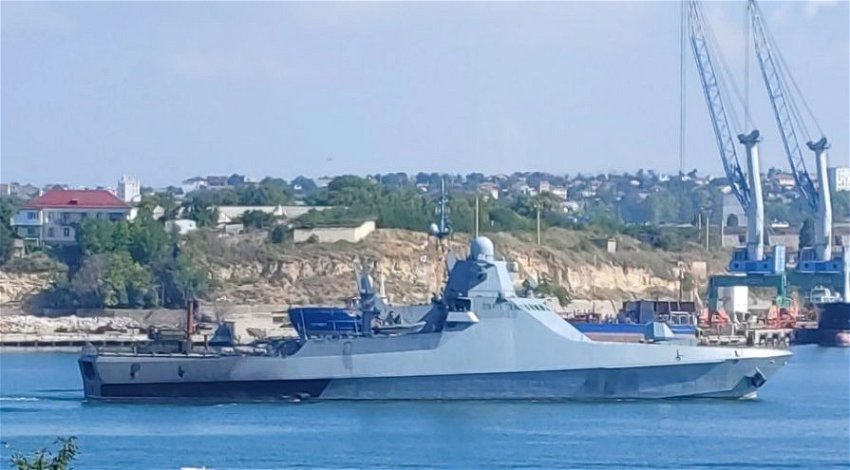 A Russian warship has entered the bay of Sevastopol with what appears to be a “burnt side” after an alleged Ukrainian missile strike, as reported on Friday, August 5.

The Russian warship had reportedly been spotted smoking in the open sea before docking in Sevastopol bay, showing what appeared to be damage after a potential missile strike.

The day before Twitter users had commented on a Russian warship allegedly smoking at sea:

Videos of another important naval action(s) off Crimea today.

Then Russian patrol ship near Sevastopol in second images, unclear what is going on

Other users have since shared photos of the Russian warship docking in Sevastopol:

1/2⚡️A Russian warship with a burnt side entered the Sevastopol Bay, – 'Krym.Realii' reports. What exactly happened to the ship is still unknown. pic.twitter.com/tHqKQzP55T

With further users pointing out that the Russian warship does not show any damage:

According to Korrespondent, the Russian warship  docked in the morning of Friday, August, 5, near Kurinoe pier.

The patrol ship of Project 22160 type Vasily Bykov of the Russian Black Sea Fleet entered the Sevastopol bay on Friday morning, August 5, at 9:15 am.

The starboard side of the ship in the area of the stern is allegedly charred with the stern itself holding an army launcher.

The ship was moored with the help of tugboats at the Kurina wharf at 9:30.am

According to further reports “strange things” occurred in the Black Sea on August 4, with the patrol ship letting out smoke baits, and after that it “started to smoke seriously.”

On the same day, naval expert HI Sutton of the OSINT project said on his Twitter that a Russian warship near occupied Sevastopol suddenly started releasing smoke baits, after which it was enveloped in clouds of black smoke.

The expert suggested that camouflaging the Russian ship with smoke baits did not help it to escape a Ukrainian missile hit and that is why it was enveloped in clouds of black smoke.

However, the reports are still unconfirmed.

The news follows reports of a father of a sailor, who went missing on the Russian cruiser ship Moskva, receiving a death certificate 110 days after the ship was hit by Ukraine’s forces, as reported on Wednesday, August 3.