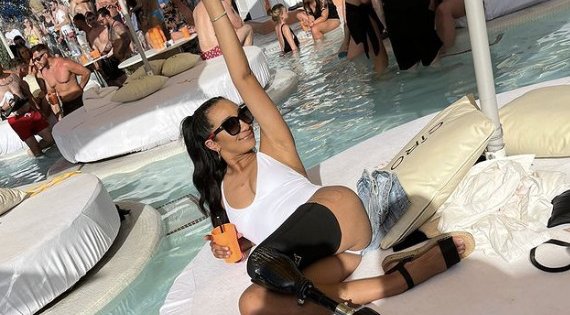 SIAN GREEN-LORD, the body positivity model who claims the image of her amputated leg was altered and used in Spain´s beach body ready campaign in July has spoken out about her experience.

The campaign, created by Spain´s Ministry of Equality, aimed to spread the message of body positivity this summer. However, it has instead prompted outrage after several of the models, including a woman who has undergone a double mastectomy, claimed their images had been used without their consent and altered.

Speaking to Ranvir Singh on the Lorraine Kelly show on Friday, August 5, UK national Sian said she was at a friend´s wedding when someone pointed out that an image Sian had posted of herself to Instagram appeared to have been used in the bottom left of the poster. However, instead of showing her amputated leg as in the original, the artist has instead shown her with two legs in the poster.

She said she thought: “Wait that is me but I don´t get it because it´s very different to the original.”

She said the original picture was taken in Ibiza in May on her friend´s hen party. “That´s the image they have taken and altered.”

The model explained she lost her leg after being hit by a taxi on the pavement in New York and spoke about the impact of the doctored image on her life. She told Ranvir: “I have been an amputee for nine years this month

“It has taken me so much strength and courage, resilience to accept myself as I am today”

She said when she saw the campaign: “I was in shock, I thought why has somebody done this.

I was absolutely baffled… I don´t understand.

She said even her husband had noticed changes in her personality since the poster hit the headlines.

She said: “My anxiety was at an all-time high.  I´ve just not been myself.

“Something about me has been missing.”

Despite the poster´s artist claiming he would share the earnings from the campaign with the models featured in it, Sian claimed she hasn´t received either money or correspondence.

She did say however that she´s received hundreds of messages of support since the campaign.

She finished the interview by claiming the UK is further ahead in terms of inclusivity and body positivity than Spain.