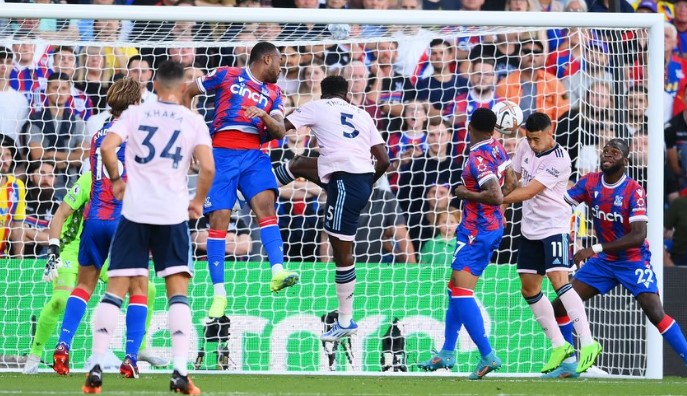 Arsenal started the 2022-23 Premier League season with a convincing 2-0 away win at Crystal Palace.

Arsenal kicked off the 2022-23 English Premier League season in style with a convincing 2-0 away win at Selhurst Park against Crystal Palace this evening, Friday, August 5. Mikel Arteta’s men continued their pre-season form to sweep the Eagles aside in this year’s curtain-raiser.

Their new signing from Manchester City, Oleksandr Zinchenko, repaid part of his transfer fee in this opening game by providing an assist for the 21-year-old Brazilian, Gabriel Martinelli, to head home in the 20th minute.

Aaron Ramsdale had very little to do in the Arsenal goal but when he was eventually called into action he made a fine save from a close-range Joachim Andersen header.

Palace tried their best to get an equaliser, with Patrick Vieira’s side spurred on by a rowdy home crowd. It was game over though on 85 minutes when a searing ball into the box from Bukayo Saka was turned into his own net by Marc Guehi.

Speaking with BBC One’s Match of the Day afterwards, Arteta told them, “I have had this feeling for the first few weeks since the boys started pre-season. They are ready, they look hungry, with that mentality that they really want to win”.

“The team came here to play the way we wanted to play – we were dominant, we were a threat, we were really lively and sharp from the beginning. Then when we felt under pressure we coped with that with resilience”, he added, after his 50th Premier League victory as Arsenal manager.

It is too early to talk about the Gunners being title contenders, but Arteta has made some inspirational signings in the close season. Zinchenko already showed his talent, and his former teammate at the Etihad, Gabriel Jesus has had a huge impact scoring seven goals in five pre-season matches.

Arteta’s new captain, Martin Odegaard, looks to have what it takes to lead the team. A fine display in the centre of defence from 21-year-old Frenchman, William Saliba, will have also pleased his coach. He has spent the best part of his Arsenal career out on loan for the last three years.