UPDATE: Evacuations begin in Duino after another huge fire breaks out in Trieste 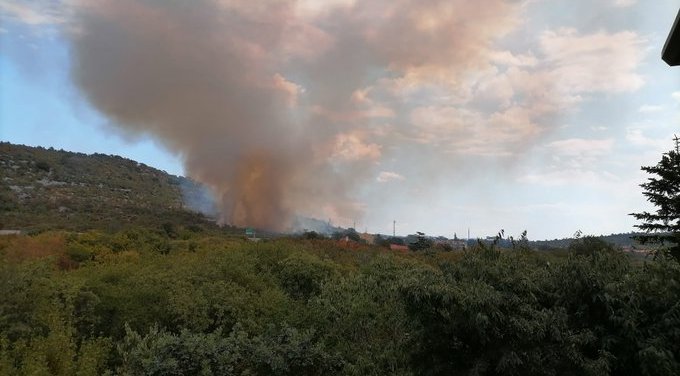 SOME evacuations have been ordered in Duino after another huge fire broke out near Karst (Trieste), in the Monfalcone-Trieste section on Saturday, August 6.

UPDATE 6.02 pm (August 6) – Evacuations have apparently begun in Duino, a town on the Adriatic coast in the municipality of Duino-Aurisina, part of the Friuli-Venezia Giulia region in the province of Trieste, north-eastern Italy, after a huge fire broke out – a couple of weeks on from the huge fire in Karst towards Trieste.

According to Trieste Cafe, the local Civil Protection said: “Don’t go to Trieste. If you are already on the road, turn around.

“The closure of the highway has just been ordered because the fire is advancing in that direction.

“Conad Duino and the Mare Pineta campsite are also being evacuated.”

One person on Twitter wrote: “They are starting to evacuate Duino.”

“More fire in my town of Duino Aurusina. Close to the highway, the railway, the houses. Closed link from Monfalcone to Trieste. The wind has risen VVFF and Civil protection at work,” another person said.

ORIGINAL 3.49 pm (August 6) – A couple of weeks on from the huge fire in Karst towards Trieste, another blaze in Duino has forced the closure of the A4 motorway in Italy in almost the exact location.

On Tuesday, July 19, fire rescue crews tackled a forest fire that broke out in the hills of Massarosa, a municipality in the province of Lucca, Italy and on Saturday, August 6, another huge fire broke in Duino near Karst (Trieste), in the Monfalcone-Trieste section.

Reporter Omar Constantini captured the extent of the fire and shared photos on social media.

“New fire in Carso Duino Nord area A4 near the railway between Monfalcone and Sistiana Visogliano,” he wrote.

The blaze broke out around 12.15 pm in the wooded area behind the Duino Nord service area and according to local media reports, the fire appears to be much larger and more dangerous than fires that have broken out in recent weeks.

Once again, firefighters and police were dispatched to the scene to tackle the flame and stop traffic on the A4 motorway, respectively.

The road is currently close in the section between Sistiana and Monfalcone towards Venice. In the opposite direction (Trieste), the traffic is temporarily slowly flowing towards Monfalcone.

Diego Lifonti shared a photo on Twitter showing air rescue arriving from Genoa to start the process of dropping water on the flames.

“The #canadair arrived from Genoa goes to the first launch of water,” he wrote.