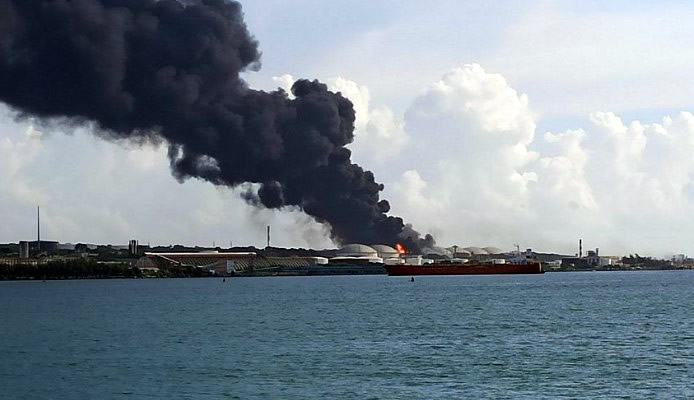 A ship has arrived in Matanzas Bay to help remove around 6,000 tons of fuel from storage tanks at the Cuban crude oil facility which is still burning out of control.

The container vessel Maria Cristina arrived in Matanzas Bay this morning, Sunday, August 7. She has the capacity to help evacuate 6,000 tons of fuel from the two storage tanks that are not yet affected by the blaze that is still raging, as reported by @cubadebatecu.

An A340-600 aircraft arrived from Venezuela in the early hours of the morning, transporting solidarity aid to help put out the fire.

As tweeted by @cubadebatecu, this, Sunday, August 7, the Cuban government has announced that by presidential order, specialized personnel from Mexican company Petroleos Mexicanos (Pemex) will fly in this morning to assist with extinguishing the morning blaze at the oil storage facility in Matanzas, Cuba. Teams from Venezuela will also fly in.

There have been offers of help from all corners of the globe, including Russia, Argentina , Chile, Nicaragua, and Europe .

Strong winds are creating a significant possibility of the flames jumping into the two other storage tanks located in the same complex. Firefighters and rescue teams have been withdrawn from the vicinity of the two burning storage tanks due to the extreme heat and danger to their lives.

Residents have been assured by the authorities that there is no immediate danger posed to them by this incident.

The Cuban government has requested international help to extinguish a massive blaze that broke out after lightning struck a supertanker crude oil storage tank in the city of Matanzas. The ensuing fire spread to an adjacent tank which subsequently exploded, as reported on Twitter by @cubadebatecu .

Firefighting teams are continuing to try and bring the blaze under control. Roberto de la Torre, operations chief of the Matanzas Fuel Marketing Territorial Division, stated that the aggregate that has been poured into the area prevents the fire from reaching the generator sets near the fire area: “The aggregate works as a firewall”, he explained .

Helicopters have been tackling the fire from above, while the two remaining tanks are being cooled in an effort to prevent them from also catching fire. The tanks are made of steel and aluminum.

Casualties of the fire have been admitted to the Faustino Perez provincial hospital, while another 157 beds are reportedly being made available in 6 other provinces of the country, to care for the injured.

As reported by the Cuban presidency today, Saturday, August 6, at least 17 firefighters are missing after a fire caused an explosion in the western city of Matanzas . A lightning strike caused the initial blaze when it hit storage tanks containing crude oil at around 7pm local time.

According to reports, around 67 people have been injured, with three in critical condition. The affected crude oil tanks, with a capacity of 50,000 cubic meters, are located at the Supertanker Base in an industrial area of ​​Matanzas, near the Antonio Guiteras thermoelectric plant . one of the largest in Cuba.

Firefighters have not yet brought the blaze under control, and local media has reported a large column of thick black smoke extending from the scene of the incident. It is apparently visible from the capital, Havana, which is about 100km away.

Miguel Diaz-Canel, the Cuban president, and prime minister, Manuel Marrero, both traveled to Matanzas at dawn. They observed the unfolding event and visited the wounded at the nearby Faustino Perez provincial hospital .

State television reported that some families from Matanzas had been evacuated from the neighbourhoods of the city closest to the affected industrial area, due to the risk of the flames spreading.

After the lightning strike ignited the crude oil tanks, the fire quickly spread to a warehouse. It looked as though the firefighters had it under control at this point but a strong wind blew the flames in the direction of a second storage tank, which subsequently exploded, as reported by ultimahora.es .