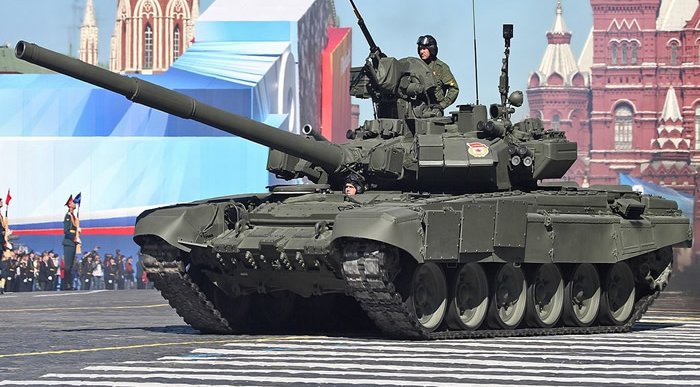 Dramatic new footage released online today, Saturday, August 6, on the Ukraine Weapons Tracker profile @UAWeapons, appears to show another Russian T-90 super tank being destroyed by a Ukrainian missile strike. These armoured vehicles are thought to cost in the region of £3 million each.

The strike is thought to have occurred in the southern Ukrainian region of Kherson, where Moscow has reportedly started gathering a large fighting force of troops and artillery, backed up by tanks.

#Ukraine: The catastrophic explosion of a Russian tank (reportedly a T-90) again due to internal ammo detonation. pic.twitter.com/OKUX2BHICd

According to open intelligence source Onyx, Russian President Vladimir Putin has seen at least 20 of these weapons of war obliterated since the conflict began. He has also allegedly lost two of his T-90Ms, the updated model that came into operation in 2016.

These high-tech tanks are nicknamed ‘Vladimir’, and the one seen in the video is believed to have been destroyed after its own ammunition supply detonated after being hit by a Ukrainian rocket. After being posted on YouTube, the video – originally from the Butusov Plus Telegram channel – has been viewed in excess of 80,000 times.

The Ukrainian military claims to have taken out a total of 1,792 tanks up until this morning. Since February 24, when the conflict began, the majority of Russian tanks destroyed have been T-72s. Reports of T-90s being blown up started emerging in May, with two hits even being confirmed by the Kremlin.

One of these first two £3 million pieces of Russian hardware was said to have been destroyed by a rocket-propelled grenade (RPG) that cost £400. The other one was blasted a few days later using an £18,000 Swedish rocket launcher.

There are several variants of the T-90 in the field, believed to have numbered around 1,000. The T-72 model the latest tank is an upgrade of, number about 5,000, and has seen the bulk of the action in Ukraine.

In recent weeks, the Ukrainian military has managed to push the invading forces back. Today’s daily report from the British Ministry of Defence reported Russian forces leaving the Donbas and heading to reinforce their Kherson forces in anticipation of a Ukrainian counter-offensive in the area.

Find out more about the UK government's response: https://t.co/ipwkuIN1lV

Officials in Kyiv already claim to have recaptured a large number of Russian-occupied territories and say they are confident that by September they will have taken back control of the whole Kherson region.