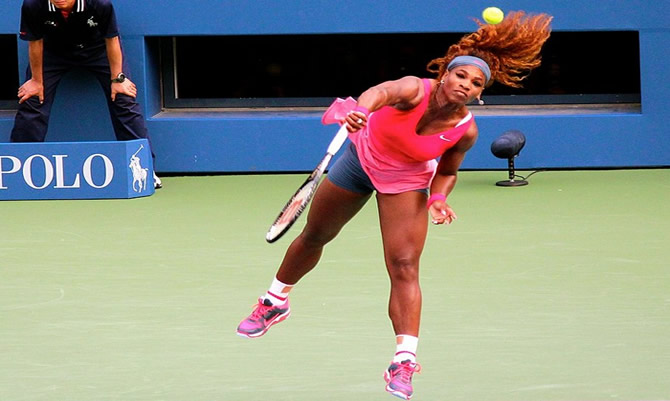 Image of Serena Williams winning her fifth US Open title in 2013. Credit: Wikipedia - By Boss Tweed from New York - Serena Williams serves at the US OpenUploaded by Flickrworker, CC BY 2.0, https://commons.wikimedia.org/w/index.php?curid=28316952

Serena Williams has announced her retirement from competitive tennis after the next US Open.

In an interview with Vogue magazine, published today, Tuesday, August 9, tennis legend Serena Williams announced that she will retire after the upcoming US Open tournament. Without a doubt, after 73 women’s singles titles, and 23 doubles titles, 40-year-old Serena is bowing out of the game as one of its greatest ever players.

Her $94 million (€91.9m) in career winnings speaks for itself and elevates her to the platform of one of the most elite athletes of all time. It is a shame that some people – as she pointed out in her interview – still like to remind her that she has not won the most Grand Slam titles of any female tennis star.

“There are people who say I’m not the GOAT because I didn’t pass Margaret Court’s record of 24 grand slam titles, which she achieved before the ‘open era’ that began in 1968. I’d be lying if I said I didn’t want that record”, Serena admitted.

Should she be victorious in the US Open in Queens, New York, this September, then that would tie Serena with the legendary Aussie tennis star. “I don’t know if I will be ready to win New York. But I’m going to try”.

Speaking of her decision to call it a day, the American sports star said: “I have never liked the word ‘retirement’. Maybe the best word to describe what I’m up to is ‘evolution’. I’m here to tell you that I’m evolving away from tennis, toward other things that are important to me”.

“I never wanted to have to choose between tennis and a family. I don’t think it’s fair. If I were a guy, I wouldn’t be writing this because I’d be out there playing and winning while my wife was doing the physical labour of expanding our family”, she continued.
The younger Williams sister is married to Alexis Ohanian, the founder of Reddit. They have a 5-year-old daughter together. Posting on Instagram today, she wrote: “I have to focus on being a mom, my spiritual goals and finally discovering a different, but just exciting Serena. I’m gonna relish these next few weeks”.