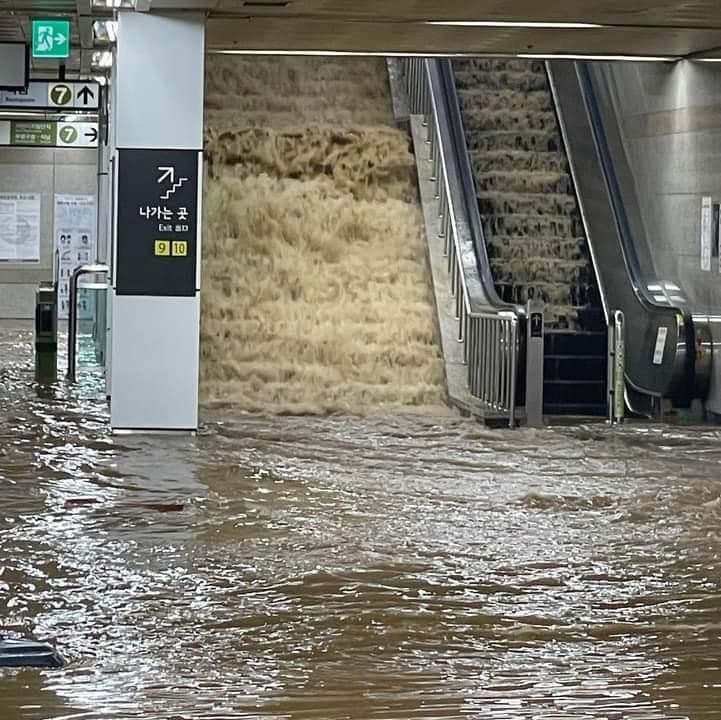 At least seven people have died due to the extreme rainfall seen in South Korea’s Seoul which has destroyed infrastructure and caused power blackouts throughout the capital, as reported by officials on Tuesday, August 9.

Korea’s Meteorological Agency issued heavy rain warnings for the capital and expects the rainfall to continue to at least Wednesday, August 10.

President Yoon Suk-yeol of South Korea headed an emergency response meeting in which he ordered authorities to focus on the prevention of casualties as well as the rapid control and recovery of flooded areas.

Video footage of the extreme rainfall has gone viral on Twitter with hundreds of people sharing footage of the downpour seen in South Korea’s capital city of Seoul.

In the footage, streets are shown completely submerged in water with vehicles unable to move due to the downpour, subway stations flooded, and people standing in the street with the water reaching their waists.

The heaviest rain ever measured in the history of Seoul, pop 25 million.
This is what happens when you warm a planet pic.twitter.com/mGabbUHjPK

I already had rain till my knees so I palipali my way home and thanks God I did it because water is flooding over subway stations rn 😭 Hope evryone in Seoul went back home safely this is so scary I saw cars immersed in the water pic.twitter.com/F9EF6g1g5t

Omg look at the water pressure 🥺 rain is unstoppable in seoul. I hope everyone arrived home safely 🙏 pic.twitter.com/puyi7Q30Ke

Due to the heavy rain , Seoul is mostly flooded ,praying for everyone's safety & well being 🥺♡ pic.twitter.com/DEnq6jUwne

The rain continues in Seoul, but there have been no text message alerts today. #seoul #gangdam pic.twitter.com/9x3nC5OPaU

if you’re curious why the members are worried about the rain…this is Seoul rn 😳 https://t.co/F88a0rhZaH

#Seoul #SouthKorea🇰🇷- Ceiling collapse from heavy rain at Isu subway station in #Dongjak with flooding on the platforms, #Gangnam and #Dorimcheon stations on Line 2 also affectedpic.twitter.com/RTXiKNKs7r

Seoul festa updated that they will go on as scheduled…really hoping for everyone’s safety as the rain is still expected to pour badly until Thursday 😰 https://t.co/iTp1o7yslD

The news of the extreme rainfall in South Korea’s capital city of Seoul comes after reports of the town of Verkhoyansk, Yakutia, Russia, being hit by a massive flood after a dam burst, as reported on Wednesday, July 13.