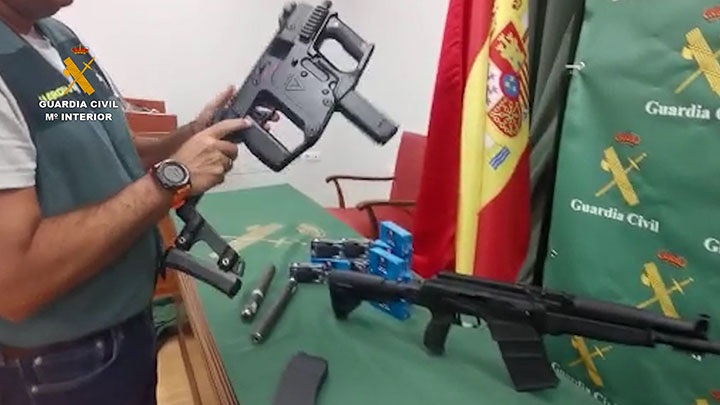 The detainees allegedly used multiple identities through the use of seven forged ID cards.

18 firearms (including submachine guns) were seized, which were acquired abroad and illegally introduced into Spain the Guardia Civil confirmed on Wednesday, August 10.

The Guardia Civil has had the collaboration of the police of Slovakia, the Czech Republic, the French National Gendarmerie and EUROPOL.

The Guardia Civil, as part of the so-called “Terral” operation, has arrested two brothers in Malaga who, using multiple false identities, were involved in acquiring firearms abroad and then smuggling them into Spain and handling them in a clandestine workshop set up in their home.

The investigation began at the beginning of this year when, through international police cooperation channels, it was discovered that a person resident in Spain had acquired in an Eastern European country several state-of-the-art pistols, originally lethal (9 mm. parabellum calibre) but recalibrated to the Flobert system. They are therefore freely available for sale in that country but not in Spain, where their legal acquisition and possession require a firearms licence.

These types of weapons are easily manipulated to revert them back to their original (lethal) calibre, which is one of the main illegal sources of weapons at the European level.

Specialists in arms trafficking from the Information Headquarters (UCE3) of the Guardia Civil initiated an investigation that led to the discovery that the DNI used for the purchases of these weapons had been falsified by means of computer programmes.

The agents identified this person, as a resident of the city of Malaga, who lacked any firearms licence. The investigation determined that this first purchase was not an isolated incident. This individual had the collaboration of his brother and they managed to forge up to seven ID cards to acquire numerous firearms and ammunition in different countries such as Slovakia, the Czech Republic and France.

The weapons acquired were submachine guns classified as weapons of war, pistols and revolvers, which, given their small size, are those most in demand by criminal organisations due to their firepower and ease of concealment.

Furthermore, in addition to arms and ammunition, they had also acquired machinery such as a vertical drill, grinders and other tools and accessories typical of clandestine workshops where firearms are handled. Among this material, a large soundproof booth for professional use, valued at more than €6,000, stood out, which was suspected of being used to shoot and test the weapons they were handling in their own home so as not to alert the neighbours.

During the entry and search of the house, carried out on Wednesday 3rd August, the two brothers were arrested and the following weapons and effects were seized:

Some of these weapons were loaded with ammunition and ready to be used at any time, with the danger that this posed for both the agents involved and for public safety, which meant that an extensive security operation had to be set up to carry out the arrests and the search.

After being brought before the courts, both detainees were remanded in custody.

In the last six years, the Guardia Civil Intelligence Service has carried out more than 109 operations against arms trafficking networks.