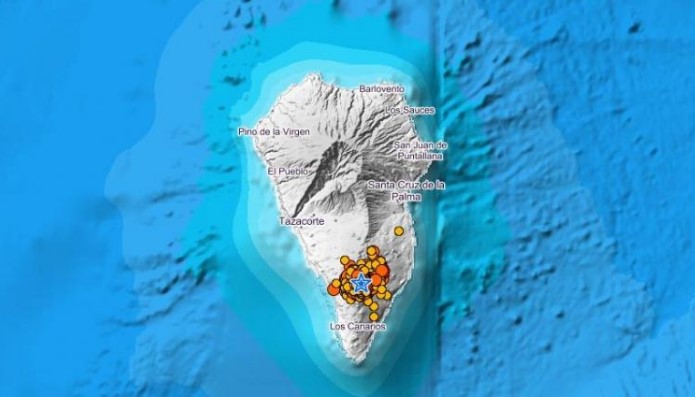 A new swarm of seismic activity has been detected by the IGN in the vicinity of the Cumbre Vieja volcano on the Canary island of La Palma.

As reported by the National Geographic Institute (IGN) , between 11pm local time on Wednesday, August 10, and 4am on Thursday, August 11, a total of 63 earthquakes were recorded in the vicinity of the eruption of the Cumbre Vieja volcano , on the Canary island of La Palma , which they say corresponds to a low-magnitude seismic swarm.

The IGN specified that the largest magnitude earthquake of 1.7 mbLg was recorded at 2:48am, at a depth of 12km. Swarms of this type are normal within the posteruptive process in which this area of ​​​​the island of La Palma finds itself, added the IGN. It continues to monitor the seismic activity in the area.

During the month of July, IGN specified that a total of 245 earthquakes were registered in the Canary Islands. A maximum magnitude of 3.6 mbLg was recorded at 7:26pm on July 16. It had its epicenter about 100km north of the island of Tenerife.

There were three earthquakes felt by the population during July, according to the information collected through the electronic macroseismic questionnaires sent.

On July 27 and 29, tremors occurred in the El Paso region on La Palma island. In both cases, they had a magnitude of 2.2 mbLg. They were felt with intensity II. The July 27 quake was felt in the towns of Callejones (Villa de Mazo), and Todoque (Los Llanos de Aridane). Two towns also reported the tremor on July 29, in El Porvenir (Breña Alta), and San Antonio (Breña Baja).

Another earthquake at 12:18pm on July 18 had a magnitude of 2.0 mbLg. Its epicenter was located to the southwest of the Gran Canaria town of La Aldea de San Nicolas and was felt with intensity II.

In recent months, five tremors with magnitudes between 1.5 and 2.8 mbLg have been located in an area of ​​recurring seismic activity between the islands of Fuerteventura and Gran Canaria.

Another 37 were registered in an area between the islands of Gran Canaria and Tenerife. They had magnitudes between 0.9 and 2.8 mbLg and depths between 0 and 35km.

Seismic activity in the interior of the island of Tenerife has been located mainly in the areas near Adeje, Vilaflor de Chasna, and Guia de Isora. A total of 120 localized earthquakes were recorded, between magnitudes 0.2 and 2.2 mbLg, at depths between 0 and 31 km.

On July 12, a seismic swarm was recorded that lasted eight hours, with 830 earthquakes detected. 61 of these were located in the Pico-Viejo area, northeast of Guia de Isora, in the same place where activity of similar characteristics was detected in June 2022, June 2019, and October 2016.

Already this month, a total of 75 earthquakes have been registered on the island of La Palma. They had magnitudes between 0.2 and 2.2 mbLg, at depths between 0 and 33km. All were located in the area of ​​the last eruption of the Cumbre Vieja volcano.

Results obtained from the observations made by the Permanent GNSS Stations of the Volcanic Surveillance Network, the InSAR processing and the inclinometer signal do not show significant deformations in any of the islands, as reported by 20minutos.es.