1,000 residents evacuated after huge fire breaks out in Zaragoza municipality of Moncayo 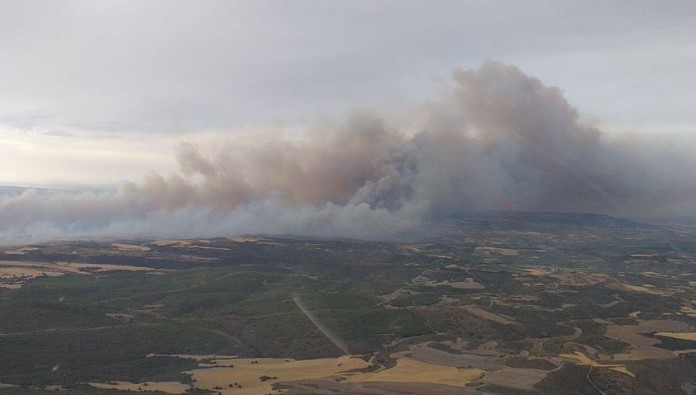 A huge fire declared in the Zaragoza municipality of Moncayo has resulted in more than 1,000 residents being evacuated from their homes.

A fire declared today in the Zaragoza municipality of Añon de Moncayo forced the evacuation of the town, along with a nearby urbanisation and the neighbouring town of Alcala de Moncayo.

In total, more than 1,000 people have had to leave their homes because of the flames, which have spread to the neighbouring towns of Borja and Ambel. The fire also led to the evacuation of the nursing home in the Zaragoza municipality of Vera de Moncayo.

Tarazona Council has adapted the city’s sports centre to help shelter the evicted. Through its Instagram account, the council has announced that this space will be available for any townsfolk “who may need accommodation”.

The Government of Aragon has announced the closure of a section of the N-122 road, from Km70 to 75, due to the fire. The 112 Aragon Advanced Command Post (PMA) vehicle has been deployed to direct and coordinate the interventions of the emergency services involved in the fire.

Residents of Vera de Moncayo have been voluntarily evicted, as well as the Veruela Monastery. As reported by Zaragoza Provincial Council, it was closed to the public at around 5:30pm due to the proximity of the flames.

The assistance of the Military Emergency Unit (UME) has been requested. Already battling the fire are four ground crews, three fire engines, a seaplane, and two BRIF from the Ministry of the Environment. Firefighters from the Zaragoza Provincial Council and volunteer firefighters from the Borja group are also taking part in the firefighting operation.

Pilar Alegria, the PSOE spokeswoman and Minister of Education expressed her “affection and solidarity” with the evacuated families and townsfolk. In statements to the media, the minister has also recognised the work being carried out by the personnel who have worked on the fires declared this summer in Aragon and in other autonomous communities.

She asked the public to exercise extreme caution because the temperatures continue to be “very high”, and there is a risk of fires. This is practically the “most complicated summer in terms of fires” since 1960 she added, as reported by larazon.es.