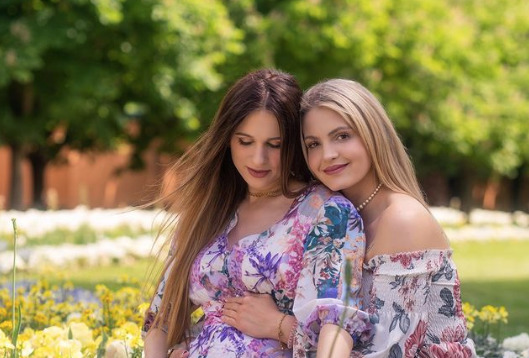 POPULAR German YouTubers ‘Coupleontour’ – consisting of Ina and Vanessa – took to Instagram on Monday, August 15 to reveal the cause of Ina’s recent stroke, who at the age of 26, had to be placed into a coma.

Coupleontour’s Ina suffered a stroke on July 26 and it was so severe that she was placed in a coma, however, thankfully, she is now awake but still fighting for life. On August 15, her wife and Coupleontour co-star Vanessa revealed the cause of the stroke.

Although Ina is awake, she has been left paralysed on one side following the severe stroke, according to German media reports.

Vanessa said via Coupleontour‘s IG stories: “The cause of her stroke has been found. It’s because she has a hole in her heart.”

She added: “There had never been any sign of this before. The hole will now be closed during an operation on Wednesday (August 17).

“It is not supposed to be an operation with major complications,” 25-year-old Vanessa told their 2.5 million Instagram followers

However, the operation should be quick because the doctors fear a second stroke, according to Ina’s wife, who added that another stroke could cause even worse damage and even affect Ina’s speech

Vanessa, who recently became a mother, said that although it was good that the operation was taking place, it “however, does not improve Ina’s condition – unfortunately.”

The news of Ina’s sudden stroke and hole in her heart diagnosis comes months after blood clots, strokes, seizures and heart problems were reportedly happening in “younger and younger people” because of “unhealthy lifestyles… along with other factors like genetics.”

On March 14, Dr Shazam Hussain, the director of the Cerebrovascular Centre at Cleveland Clinic, said that “we think of stroke as being something that happens in older ages, but we are seeing it in younger and younger people.”

“It relates, generally, to people having unhealthy lifestyles, maybe not eating as well or not getting in regular exercise, along with other factors like genetics. So it’s important that people don’t just think of it as something that happens to older people. If you’re younger and have those symptoms, you’ve got to get to the hospital,” he said.