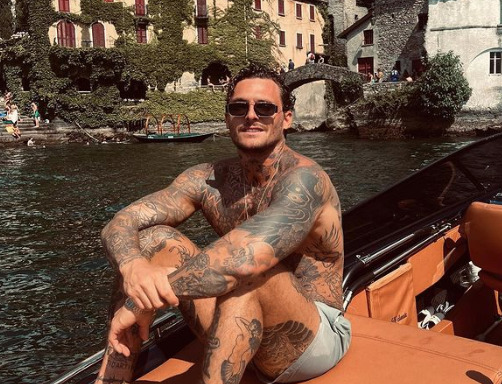 Cristiano Iovino claimed to be the cause of Totti and Blasi's split. Image: @cristiano1011/Instagram

As reported last month the couple broke up after more than 20 years together, now the man who caused World Cup Winner and Roma Captain, Francesco Totti and TV Presenter, Ilary Blasi’s divorce is in the spotlight.

In July, this news shocked the football world. The couple formed by Totti and Blasi, who appeared to be one of the most stable couples in football and whose wedding was televised and watched by more than a million people, ended their love story after more than 20 years together.

After several days of gossip and rumours of infidelity, the dreaded official confirmation came in the form of a statement, “my relationship with Ilary has unfortunately come to an end. I have tried to overcome the marital crisis but today I realise that the separation, although painful, is no longer avoidable. I will remain close to Ilary in the upbringing of our three wonderful children, always with great respect for my wife,” said the Roma captain according to Tikitakas.

The press was quick to blame the ex-footballer for the split, accusing him of having started an affair in February with economist Noemi Bocchi. Now the story has taken a turn and it seems that the disloyalty started on Blasi’s side and she was linked to “a young man for whom she had literally lost her mind”, according to the Italian newspaper, Corriere della Sera.

Corriere della Sera has named the man with who Ilary has allegedly been unfaithful with. His name is Cristiano Iovino, a Rome-born personal trainer who was actually Totti’s personal trainer. The TV presenter and his personal trainer are said to have started a relationship about a year and a half ago.

According to the newspaper, Totti had found compromising messages on his wife’s phone and claim that Blasi fell in love with lovino and out of love with Totti. The presenter took advantage of her trips to Milan as the presenter of ‘The island of celebrities’ the city where the lovino lives to carry out the affair.