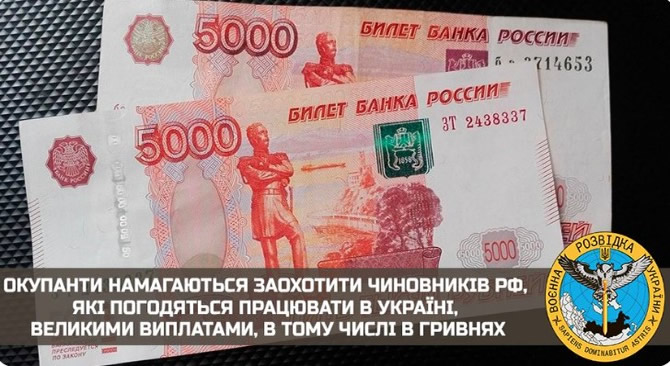 Officials of the Russian Federation are being offered large salaries to go and work in Ukraine.

According to a report today, Monday, August 15, from the intelligence department of the Ukrainian Ministry of Defence, the leadership of the Russian Federation continues to agitate Russian civil servants to go and work in the temporarily occupied territories of Ukraine. They are allegedly offering inflated salaries to any employees who decide to relocate.

The report claims that the administration of Belgorod – employees of the city hall, managers, and employees of municipal institutions – are being promised up to double their current salary in rubles during the period of their possible work in the ‘DPR’ and ‘LPR’.

With the city of Belgorod located just 40km north of the border with Ukraine, it is considered to be within easy commuting distance. Expenses related to daily business trips and other needs, will apparently be compensated from the city budget.

Daily allowances are offered in foreign currency (meaning Ukrainian hryvnias) at the rate of: 50 per cent for heads of the administration; 40 per cent for the first and some other deputies; and 30 per cent to heads of departments and their deputies, as well as for chiefs and leading specialists.

These promises to increase salaries are connected with the categorical reluctance of Russian officials to go to Ukraine due to fears for their own safety. However, despite these large offers, Russians continue to massively refuse to go on such dangerous business trips.

Currently, the government of the Belgorod region is responsible for supporting the Russian occupation regime in the Bilokurakin and Troitsky districts of the Luhansk region. Starting in September, they are planning to reopen schools there, with the participation of teachers from Belgorod.

Kindergarten teachers from the Russian Federation are also lined up to go there. In general, it is allegedly planned to allocate 1.6 billion rubles from the Belgorod budget. That is despite the fact that the approved budget deficit of the Belgorod region for 2022 already stands at 30.8 billion rubles.