WATCH: Two monkeys in Gibraltar fight over a Spanish flag 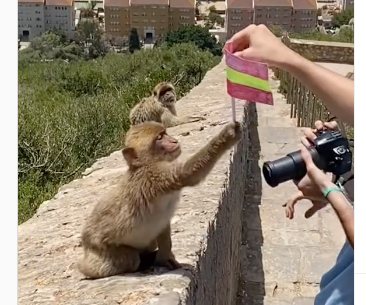 A VIDEO showing two macaques monkeys in Gibraltar fighting over a Spanish flag has led to some funny comments on social media.

The video of the macaques monkeys in Gibraltar, located on Spain’s south coast, garnered hundreds of comments and thousands of views when it was uploaded to social media platform Instagram on Wednesday, August 17.

The well-known social media account Cabronazi posted the video, sent to them by user @aolivero12, which shows a young man handing one of the macaques a Spanish flag.

“You’re Spanish, right? Repatriate the area,” the young man said in the video as the monkey takes the flag.

The monkey starts running while another one chases him before they both jump towards some branches and fight to grab the flag amidst the laughter of the tourists in the area.

People commented on the video.

“Since education in this country doesn’t work 🥴” one wrote.

Another said: “Capture the flag 😂”

While a third wrote: “Everyone wants to be Spanish while they emulate in Gibraltar or Andorra to pay less taxes.”

The video of the monkey’s comes after another animal was caught trying to break into an important building over on the other side of the world.

On Thursday, August 11, a video showing a kangaroo apparently trying to break into the Russian Embassy in Australia went viral on social media.

Twitter user Bakhti Nishanov wrote: “Apparently a kangaroo attacked the gates of the Russian embassy in Australia. I guess now we know where kangaroos stand on the war.”

While another said: “You’ve got it wrong. Kangaroo was trying to defect. Drunk Russian embassy staff didn’t let it in.”