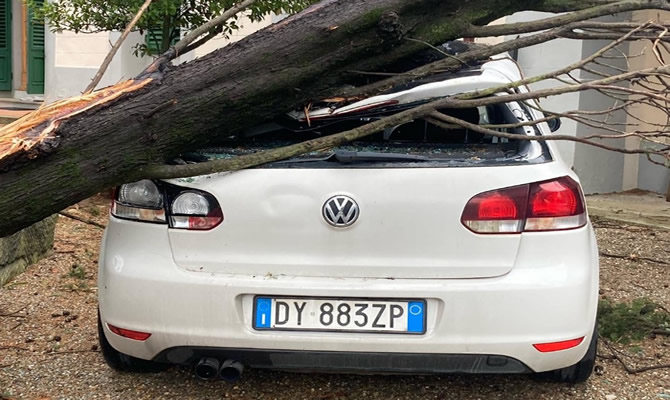 Parts of central and northern Italy have been hit by violent storms and heavy rainfall, leaving two dead and others injured.

Northern and central Italy were battered by storms this Thursday, August 18, with two people reported to have died. One fatality occurred in the province of Lucca where a man was killed by a falling tree. The second casualty was a woman, in the Carrara province.

Four more people were injured when trees fell at a campsite near the town of Marina di Massa. According to rescue services and local authorities, extensive damage has been caused.

In the city of Florence in Tuscany, a man was injured at an open market when a branch broke from a tree, became airborne, and struck him.

In Tuscany, the storm was so strong that it spun the Ferris wheel in the commune of Piombino. pic.twitter.com/cS3jsBzRMi

Umbrellas and chairs were blown away in the coastal region of Versilia, and several other nearby seaside resorts after a violent thunderstorm hit. A tornado damaged homes in Tigullio, causing five families to be evacuated.

The coastal area between Sestri Levante and Chiavari in the northern Liguria region of the country was hammered by strong gusts of wind. After beach huts got blown onto the tracks, power lines were brought down, causing disruption on the Genoa-La Spezia train line.

Storms in Venice were so strong that fragments of the belltower of St Mark’s were ripped off. Emergency accommodation was organised in gyms and schools by the local Civil protection agency for those whose homes were damaged during the adverse weather conditions.

Italy is going through a strange period of weather. Central and northern parts are struggling with violent winds and heavy rain storms, while the south of the country is basking in a heatwave that has reached as high as 45°C in recent days.

Destructive winds are rocking parts of #Italy & #Corsica w/ 3 dead at this time. This video is from Florence, #Tuscany where wind gust are strong enough to move this Ferris Wheel.

Around 30 people had to be evacuated from their homes on the island of Pantelleria on Wednesday, August 17, This was done as a precaution after many hectares of vegetation were destroyed by wildfires on the Mediterranean island, as reported by aa.com.

We've seen some minor lightning in Italy this evening. pic.twitter.com/2c3o4rPZsh

Incredible storms in Tuscany today .. this is the light show from my bedroom window 🎇 pic.twitter.com/bJwtFALKCP

Lots of lightning but no rain in Tuscany tonight. pic.twitter.com/SrAXhGAVIn