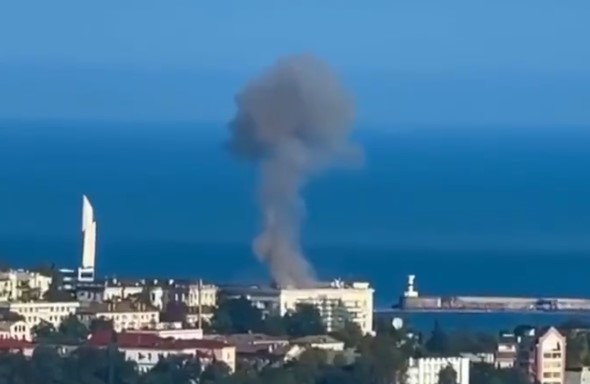 Russia’s Black Sea Fleet HQ in Sevastopol reportedly came under attack from a Ukrainian kamikaze drone on the morning of Saturday, August 20. What appears to be a large explosion sending thick clouds of black smoke into the sky can be seen in footage uploaded onto social media.

“I am at the Black Sea Fleet’s headquarters now, wrote Russian-appointed Sevastopol Governor Mikhail Razvozhaye on his Telegram account. “A drone hit the roof here 25 minutes ago. Unfortunately, it was not downed. There are no casualties”.

Russian-installed "governor" of occupied Sevastopol Mikhail Razvozhayev also said that a drone hit the roof of the fleet's headquarters. He said there were no casualties.

A drone flew into the roof of the headquarters of the Black Sea Fleet in Sevastopol, Crimea. #Ukraine #Crimea pic.twitter.com/P6iQpZ8B43

Online footage showed shocked Russian tourists observing the attack in the popular Crimean summer holiday destination. Kyiv appears to be ramping up its long-distance offensive against Vladimir Putin, whose own operation seems to have stalled for the time being.

People of occupied Sevastopol are happy to see the HQ of the Russian Navy being attacked by a kamikaze drone pic.twitter.com/4NBZIFM9mN

On Friday, August 19, showing their ability to hit targets well behind enemy lines, another series of huge explosions occurred. Ukrainian forces pummelled areas close to military bases in both Russian-occupied parts of Ukraine and in Russia itself.

Saturday’s suspected drone attack on the naval headquarters in Crimea is the second such action. Russia had to cancel its scheduled Navy Day celebrations after a bomb hit the site and injured six people on July 31.

It was recently confirmed by western officials that at least half of Moscow’s Black Sea naval aviation force was destroyed in an attack on a military airfield last week in Crimea.

MASS SORTIE: Ships of the Black Sea fleet are seen exiting the Russian Naval Operations Base at Sevastopol this morning after this morning's UKR drone attack on the fleet HQ. The ship in the foreground is the 107-year old Kommuna, used to salvage the sunk cruiser Moskva. https://t.co/HvTcpCiana