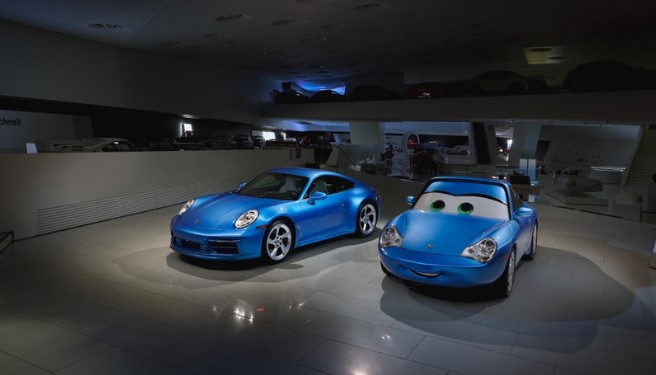 Image of the one-off 'Sally Special' that sold for a record amount in Sotheby's. Credit: [email protected]

A one-off Porsche 911 based on the ‘Sally’ character in the animated Pixar movie ‘Cars’ has sold for a record €3.62m at an auction in Sotheby’s.

As reported today, Monday, August 22, by the @PorscheNewsroom, a one-off ‘Sally Special’ based on the character in the animated Pixar movie ‘Cars’ has sold for a record €3.62m at a Sotheby’s auction. Every penny raised by the sale held last Saturday, August 20, will be donated directly to two charities.

The #Porsche 911 Sally Special has sold for a record $3.6 million at @rmsothebys' Monterey Auction. Every dollar of the sale price for the one-of-one sports car will be donated to @girls_inc and @unrefugeeagency to support children and families. More: https://t.co/zWCCTRPrBC pic.twitter.com/PGXhm5giUC

One will benefit young women through a donation to Girls Inc. @girls_inc, and the second portion will go to @unrefugeeagency, the USA for UNHCR fund, an organisation that supports refugees from Ukraine.

The ‘Sally’ auction is the first time that Pixar has collaborated on such an event, held as part of the Monterey Car Week in California.

Dr Sebastian Rudolph, Vice President of Communications, Sustainability and Politics at Porsche AG, speaking of the unique ‘Sally’ project last Friday, August 12, said: “Vehicles need a face and a story, and the animated Pixar’s film ‘Cars’ has impressively transferred done just that: brought cars to life on the big screen”.

“The story conveys values such as friendship, love and mutual support – and in the middle of it all is a Porsche: ‘Sally Carrera’. Together with Pixar, we have brought the spirit of Sally to life in a new way, not on the screen, but off the screen. With this one-off street legal 911, the ‘Sally Special’, which we are auctioning for charity, we want to help people who urgently need support, quite in keeping with the spirit of the film character”, he explained.

The project began in November 2021 and united members of the original Cars team that brought both the film character and life-size Sally Carrera to life more than 20 years ago. The team included Jay Ward, Creative Director of Franchise at Pixar Animation Studios, and Bob Pauley, the Production Designer who first drew Sally Carrera for the Cars film.

They were assisted by members of the Sonderwunsch team at Porsche Exclusive Manufaktur in Stuttgart and designers from Style Porsche in Weissach. The team worked together for ten months – the result was a unique factory one-off.