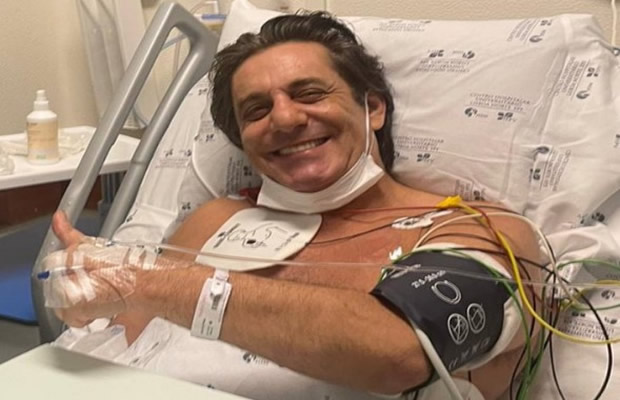 Image of Paulo Futre in his hospital bed in Lisbon. Credit: [email protected]

Paulo Futre, the footballing legend from Portugal has messaged his fans from his hospital bed to let them know he is alright.

Portuguese football star Paulo Futre took to social media from his hospital bed in Lisbon to reassure all of his fans that he is okay.

“Friends, very obrigado to all for your support. I’m going to keep fighting, there are still many games to play”, he posted on his official Twitter account, adding, ” A big hug”. An attached image showed Futre connected to various tubes while giving a ‘thumbs up’.

He also received a message of support from LaLiga in Spain, where he played for Atletico Madrid. “We wish you a speedy recovery, @PauloFutre! We are with you!”, they tweeted.

Paulo Futre, the legendary Portuguese football star has been hospitalised today, Sunday, August 21, in the country’s capital city, Lisbon. It is believed he suffered a suspected stroke after complaining of not feeling well following his mother’s funeral.

According to the Record, the former player was taken to the Barreiro Hospital, on the south bank of the Tagus. He was subsequently transferred to the Santa Maria hospital in Lisbon. Futre is said to be undergoing various medical tests with a report on his health expected in the next few hours.

Futre entered the football history books after winning the Champions League with Porto in 1985, a title that earned him the Ballon d’Or in the same year. This led Jesus Gil to sign him for Atletico Madrid, where he had two spells, one between 1987 and 1993, and another in 1997. After retiring, he also served as the club’s sports director.

He accomplished a unique statistic by turning out for each of Portugal’s ‘big three’: Benfica, Porto, and Sporting. His career also included stints with Olympique de Marseille, Reggiana, Milan, West Ham, and Yokohama Flugels.

We send our strength and encouragement to our legend @PauloFutre. We wish you a speedy recovery. The whole Red & White family is with you.