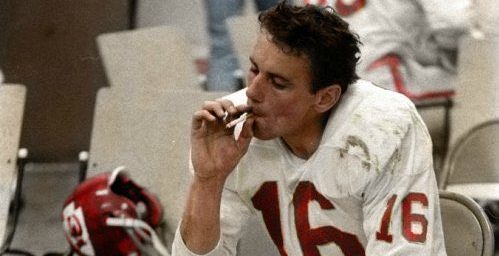 Len Dawson, a Hall of Fame quarterback who played for the Kansas City Chiefs during their first Super Bowl championship, remaining with the team for six decades as a player and broadcaster, has died aged 87, as reported on Wednesday, August 24.

Kansas City Chiefs quarterback Len Dawson, known by many as “Lenny the Cool” was born on June 20, 1935.

He would go on to play for the Kansas City Chiefs for 14 seasons he was the longest- sports anchor in Kansas City history.

His family reported his death in a statement that read:

“With wife Linda at his side, it is with much sadness that we inform you of the passing of our beloved Len Dawson. He was a wonderful husband, father, brother and friend. Len was always grateful and many times overwhelmed by the countless bonds he made during his football and broadcast careers.”

“He loved Kansas City and no matter where his travels took him, he could not wait to return home. Linda wants to acknowledge and thank the wonderful team of doctors, nurses and support staff at KU Med who showed tremendous amounts of love and compassion for Len.”

Following the announcement of the death of the legendary Kansas City Chiefs quarterback, tributes have flooded Twitter:

RIP to the coolest cat to ever wear a Chiefs uni.

Len Dawson was a legend to the game of football and a hero to the city of Kansas City. His swagger was unmatched. Rest easy, Len. 💔 pic.twitter.com/7tDXWKeYbr

RIP to legendary @Chiefs QB and broadcaster, Len Dawson. Incredibly honored to have had the chance to meet him, especially living all the way in NY. I’ll treasure this memory forever! #ChiefsKingdom pic.twitter.com/zNnzjC4YDI

What a sad morning for #ChiefsKingdom. Rest In Peace to the legend, Len Dawson. Keep his family and friends in your prayers 🕊. pic.twitter.com/pyLKp81uXC

BREAKING: Awful news from #ChiefsKingdom . @KMBC 9 colleague and @Chiefs great Len Dawson has died. He was 87 years old. A friend. A member of our family. Our hearts hurt as we mourn his passing. pic.twitter.com/gGddS79bGq

A true giant of the game. ❤️ pic.twitter.com/gY6Tpb9rZJ

RIP Len Dawson. Thanks for all the great conversations. You will always be Lenny the Cool. A true Kansas City Legend.🙏🏽 pic.twitter.com/thqvEjxOmV

RIP len dawson. this has been my phone background for six years and probably will be for the rest of my life pic.twitter.com/U7AURxlbAP

The death of the legendary Kansas City Chiefs quarterback Len Dawson comes after the death of Gene LeBell, an American martial artist and fighter who died aged 89, as reported on Wednesday, August 10.