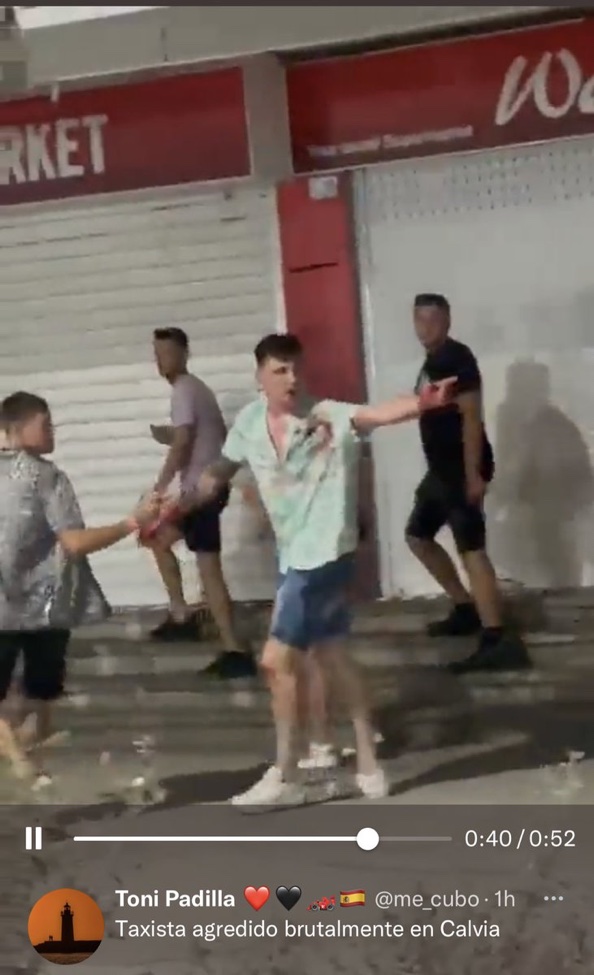 FOLLOWING a violent brawl that left a taxi driver in Mallorca’s Magaluf with horrific injuries, two Brits abroad were arrested.

The shocking incident happened in the early hours of Tuesday, August 23, when the taxi driver was brutally beaten by the British tourists on Avenida Magaluf on Spain’s Mallorca island.

Footage circulating social media shows the moment a 57-year-old was pushed to the ground and beaten by the Brits.

Reports from Mallorca confirm that a 21-year-old and a 22-year-old were arrested following the incident, which was caught on camera by witnesses, who were heard shouting for people to call the police.

The video footage shows the taxi driver being kicked and punched in the head and body.

Images after the assault show one of the men with blood-stained hands.

The incident is believed to have happened as a result of three young men jumping on the taxi’s bonnet.

The driver is said to have got out of the vehicle and after some words were exchanged between the group, the brawl broke out.

According to the Calvia town hall, the man spent several hours at the Son Espases Hospital before being discharged.

Since the incident, the taxi driver has been named Gabriel Callero.

Speaking to the Daily Mail on Thursday, August 25, Callero said: “Everything happened when I was passing the strip where all the English bars are in Magaluf.

“Just as I was passing the Whitehouse Hotel slowly three guys came up too close to my car and one of them jumped on the hood.

“I stopped immediately and got out to find that no damage was done to it,” he continued.

“But then two of these British guys started to laugh at me, so I asked them what was so funny?”

He revealed that he is still badly affected from the assualt.

“I feel really sick, dizzy and I have a constant ringing in my ears which I’m told by doctors could stay with me forever caused by the damage,” he said.

Horrifically, a similar incident happened in the US recently.

Tragically, on this occasion, the taxi driver was beaten to death.

Three suspects, two 20-year-old men and a 15-year-old girl were arrested in connection with the killing of the Ghanaian taxi driver in New York City (Queens) last week.