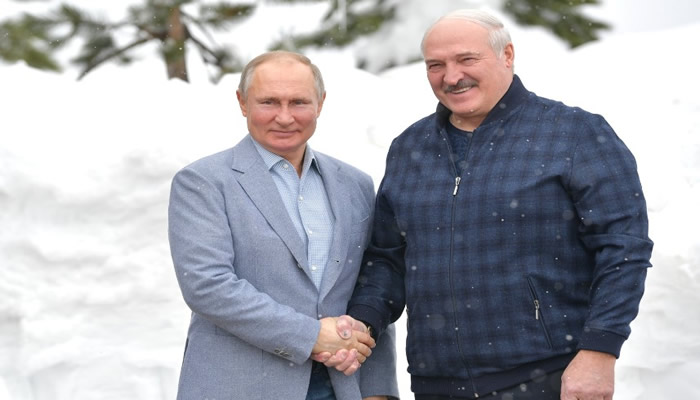 Image of Alexander Lukashenko with Vladimir Putin in February 2021. Credit: kremlin.ru CC BY 4.0

Aircraft in Belarus are now upgraded and able to carry nuclear weapons Alexander Lukashenko has warned.

Belarus President Alexander Lukashenko, today, Friday, August 26, announced that his country’s warplanes are now ‘nuclear ready’ should the West provoke Minsk. They have been upgraded to carry these weapons he said, adding that ‘selected targets’ have already been chosen.

‘They (the West) have to understand that no helicopters or aircraft will save them if they decide to aggravate the situation. Putin and I once said in St Petersburg that we will refit Belarusian Sukhoi aircraft among other things so that they could carry nuclear weapons. Do you think we talk nonsense? Everything is ready!”, the Belarusian is quoted by the state-run news agency Belta as saying.

He is also quoted as warning that should his warning not be heeded by Western governments then ‘the targets have been locked in’.

Lukashenko is a long-time loyal ally of Vladimir Putin, and has been in control of Belarus now for 28 years, ruling with an iron fist. His reliance on Moscow for its support, both politically and economically, is not a secret. During their meeting in June, he voiced his concerns over the policies of NATO countries that border his state.

Today’s veiled threat comes after the Russian leader offered in June to upgrade Belarus aircraft. He placed factories in Russia at Lukashenko’s disposal to carry out this task, while also helping to train the pilots.

There was no mention of any exact number of planes that had been prepared to carry nuclear warheads, and there was silence from the Kremlin on the subject. When the conflict began in Ukraine last February, the Belarusian leader had given Moscow permission to position nuclear weapons on his soil.

Belarus has already allegedly been used by Putin as a base from which to launch his offensive on Ukrainian territory.