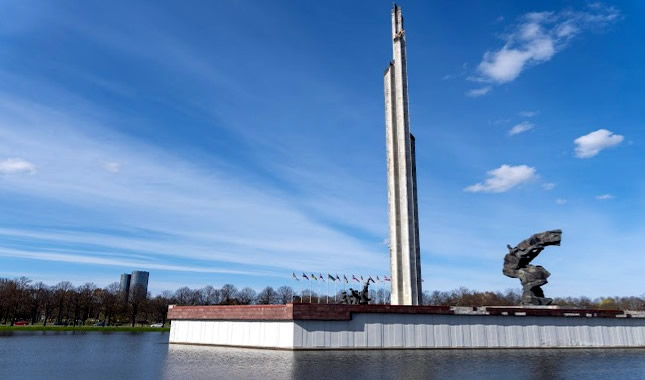 An enormous Soviet-era obelisk located among other Communist monuments in Riga’s Victory Park in Latvia was toppled using heavy machinery.

A Soviet-era concrete obelisk featuring Soviet stars was demolished by the authorities in Latvia this Thursday, August 25. The statue had originally been erected in 1985 as a commemorative monument to those who lost their lives during World War II in the Red Army’s victory over the Nazis.

The toppled monument comprised five spires covered with Soviet stars. Its demise was filmed live by a Latvian broadcaster.

Located in Victory Park, in the country’s capìtal city of Riga, the statue stood almost 260 feet tall, standing among several other Soviet memorials that had been installed in the same area. A statue featuring a woman with her arms outstretched also stood in the park had also been toppled on Wednesday, August 24. It was alongside two sets of statues that represented soldiers from the Red Army.

🇱🇻 Motherland statue in Riga taken down by the fascist government in Latvia pic.twitter.com/ga6rplH26m

Since the invasion of Ukraine, these statues have slowly been removed, as reported by israelnationalnews.com. Heavy machinery was deployed to bring the obelisk crashing down into the pond next to it.

When the monument was first placed in Victory Park, Latvia was still part of the old Soviet Union. After the country’s independence was declared in 1991 it became first an EU member and then a NATO member. The Latvian government had been heavily criticised for removing these statues at the time.

Latvia has a significant population of ethnic Russians and shares a 133-mile border with its neighbour. The Latvian parliaments had approved the demolition of the obelisk back in May and that was quickly followed up by the Riga City Council.

Posting on Twitter, Edgars Rinkevics, the Latvian Foreign Minister, described the removal of this obelisk as: “Closing another painful page of history and looking for a better future”.

#Latvia takes down one of the symbols of the Soviet occupatio in #Riga. Closing another painful page of the history and looking for better future https://t.co/USleIQJdk7