WATCH: A mouse deer, the smallest ruminant in the world, is born in Bioparc, Fuengirola 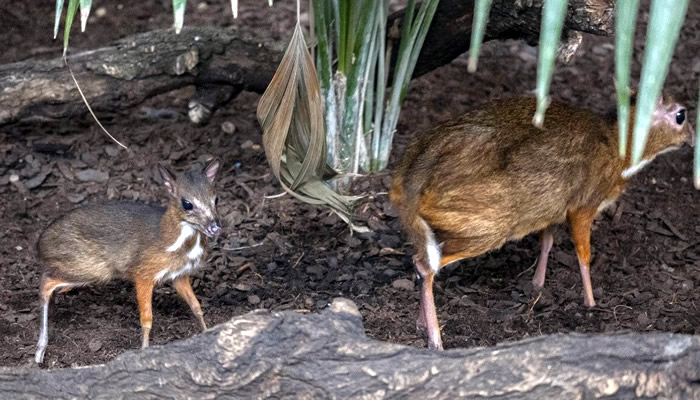 Bioparc Fuengirola has experienced the birth of a mouse deer, known as the smallest ruminant in the world.

As reported on Friday, August 26, the Bioparc Fuengirola family continues to grow. It has witnessed the arrival of a ruminant considered the smallest in the world: the Javan lesser mouse deer calf. A few weeks ago, the park’s Veterinary and Zoology teams came across this pleasant surprise.

At birth, the fawn already has a size comparable to 30 per cent of its mother and weighs around 200 grams. Only a few minutes after being born, these little ones can stand up without problems.

Despite quickly acquiring agility to move around the entire area where it lives in the Malaga municipality park, the little one will remain hidden most of the time. For the first few months of its life, it will be difficult for visitors to see this new arrival.

Mouse deer pups grow rapidly and can triple their weight in just a couple of months. When they are adults they will reach 1.5 or 1.8 kilograms. The female goes back into heat right after giving birth to its calf.

This ruminant can reproduce at any time of the year, allowing the frequent birth of new offspring. Gestation lasts about four and a half months. In this species, the fact that copulations occur immediately after birth is quite curious.

The female goes into heat at the time of giving birth, a fertile heat that allows her to get pregnant again immediately after giving birth”, explained Rosa Martinez, a veterinarian at Bioparc Fuengirola and director of conservation projects at the Bioparc Foundation.

It is a species that reaches sexual maturity around five months, at which point it can begin to reproduce. These animals tend to form monogamous groups. It is a shy, singular and relatively unknown species.

Lesser mouse deer, unlike European deer, do not have antlers, but males develop highly elongated and sharp tusk-like upper teeth. Females do not get these teeth.

These mammals have a small and prehistoric digestive system made up of three stomachs – different compartments – unlike the more evolved ones made up of four, common in ruminants such as cows.

This digestive adaptation allows them to ruminate, a process in which they chew the food they have previously eaten. Cows, sheep, goats and deer, are also examples of ruminants.

They are animals that show solitary and often quite shy behaviour, they also try to go unnoticed. For this reason, people who visit Bioparc Fuengirola may find it difficult to spot them, because they will generally hide between a branch or trunk of a tree.

Despite being included in the EAZA programmes and regulated by CITES, the mouse deer is largely unknown to the scientific community. Its small size means that fieldwork in its natural habitat is scarce. However, there is unanimity in describing 6 species with multiple subspecies that are distributed throughout the dense and remote forests of South Asia.

Bioparc Fuengirola is one of the most successful parks in the EEP (European Endangered Species Program) in the breeding of the mouse deer, in which it has participated since 2003. During these more than twenty years, the park has registered 16 births with the species.