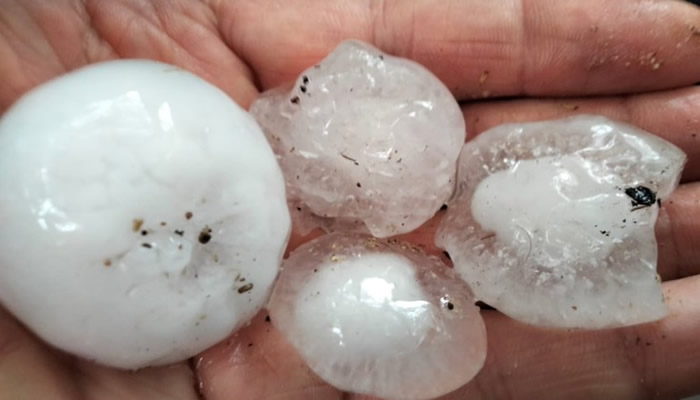 Image of hailstones that fell in the Valencian Community. Credit: [email protected]

Parts of the Valencian Community have experienced hailstorms with some stones the size of golf balls.

Parts of the Valencian Community have once again today, Saturday, August 27, experienced extreme weather conditions. It is still August yet the municipalities Moixent and Fontanars del Alforins were hit with a hailstorm. The ground was temporarily covered in white, with some stones as large as golf balls.

A video uploaded onto the AVAMET Twitter account by Sara Mico shows the size of the hailstones that fell in the municipality of Fontanars dels Alforins in Vall d’Albaida.

A yellow warning had been issued by AEMET, the State Meteorological Agency this morning, warning of storms in the provinces of Valencia and Castellon.

As reported by 112CV, and the respective provincial fire department, a lightning strike during the storms ignited a vegetation fire in the municipality of Llombai. It was finally declared extinguished by the Fire Brigade at 7:14pm.

Specifically, the fire broke out in the El Tello area. Five fire crews were dispatched from the Valencia Provincial Firefighters Consortium. Another two units of specialised forest firefighters were also sent by the Generalitat. Two aerial means, two BRIFOs and a forestry coordinator were also involved in battling the blaze.

Similarly, another fire caused by lightning in the Castellon town of Les Useres was also reported as being out at 7pm. Four aerial resources were deployed to the scene, along with four firefighting units, including one that was transported by helicopter. They were joined by three fire appliances and two teams of specialised forest firefighters, plus a forestry coordinator.

The AEMET reported a total of 2,814 lightning strikes hitting the Valencian Community this Friday, August 26. Of this number, 2,251 were in Valencia, 290 in Alicante, and 273 in Castellon.

Castellon and Valencia were placed on alert today for showers and strong storms with hail. According to Aemet’s prediction, showers with occasional thunderstorms were expected during the afternoon, as reported by lasprovincias.es.