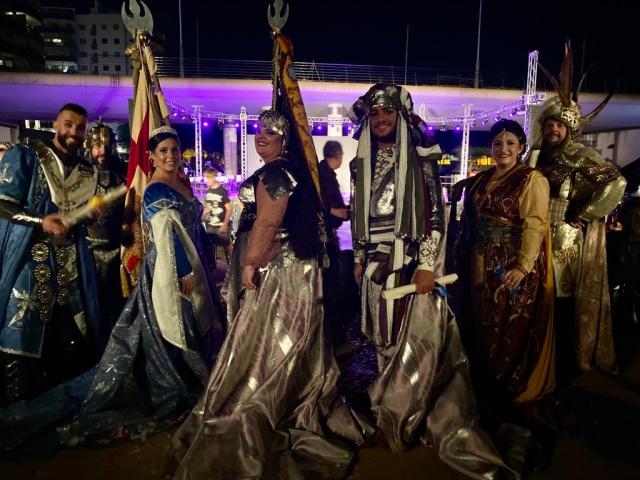 After a two-year break, Alicante’s El Campello started the long-awaited presentation of the captains of the Moors and Christians for the 2022 fiestas.

With El Campello’s municipal park full to the brim and an atmosphere that augurs one of the best patron saint festivals in history, El Campello’s Town Hall put on an incredible show on Saturday, August 27.

Institutionally, there was representation from all the municipal political parties, as well as from the Provincial Council, represented by the deputy mayor, Alejandro Morán, El Campello Town Hall confirmed on Sunday, August 28.

The Junta Festera and the Town Hall put on a very colourful show that culminated with the launch of a pyro-musical castle that amazed the crowds that attended.

“This is our year”, was repeated over and over again, both in the speeches and in the audiovisuals that accompanied the four dance numbers that represented the four elements of earth, fire, water and air.

This traditional celebration began in 1976, to commemorate the fishing history of El Campello and the struggle between Christians and Berber pirates between the 15th and 17th centuries.

The festivities of Moors and Christians of El Campello take place on October 15 coinciding with the day of Santa Teresa.

The official activities begin the days leading up to the event, starting on the evening of October 11.

In the early morning of October 12, the Moorish landing will take place. It is the first official act of the festivities, representing the Moravian invasion that arrived from the sea, where the struggle against Christians on the beach is recreated. Pirates, horses, fire and cannon fire shows will happen throughout the morning, giving rise to an incredible performance.

From then, different activities begin.

October 15, is the official day of the holidays and is reserved for religious events to honour Santa Teresa and the Virgin of the Destitute.

The festivities culminate with a spectacular firework display.