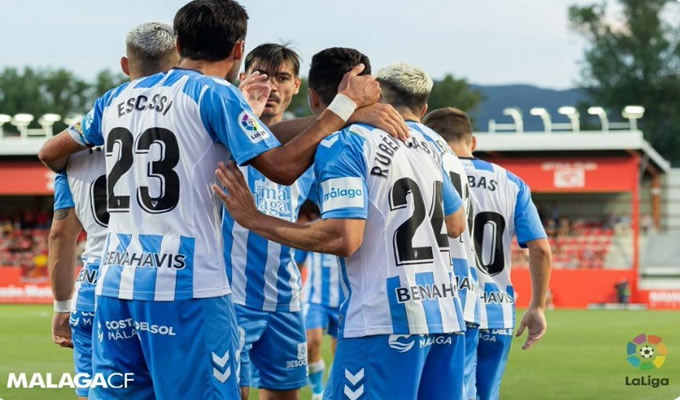 An excellent win against CD Mirandes in Anduva saw Malaga CF pick up their first three points of the LaLiga SmartBank season.

After a shaky start to their Segunda Division season, on Saturday, August 27, Malaga CF travelled north to Anduva, where they faced CD Mirandes. The Estadio Municipal de Anduva in Miranda de Ebro has a capacity of just 5,759, and the blue and whites needed to get a positive result in front of their loyal army of fans.

Matchday 3 of LaLiga SmartBank saw an excellent afternoon’s football resulting in a 3-1 win for the Malaga team, gaining its first three points of the season. Goals came courtesy of Javi Jimenez after 45 minutes, Ruben Castro in the  51st, and Fran Sol rounding out the game on 76 minutes.

Malaga took control of the game from the off, with Febas quickly one-on-one against the rival goalkeeper, but his low and powerful shot, skimmed the post and went out of play. Several more opportunities presented themselves before Javi Jimenez’s goal on the stroke of halftime, with Ruben Castro, Fran Sol, Febas, and Javi, all hitting the woodwork.

After the break, Malaga started where they left off, with Juanfran again hitting the post after 47 minutes. Luis Muñoz entered the field of play, replacing the injured Ramalho, and just minutes later, Ruben Castro made it 0-2. Gallar’s cross from the left wing found Castro who had sneaked past the defence to toe-poke the ball home.

CD Mirandes finally saw a glimmer of hope when they were awarded a penalty in the 72nd minute, which Raul Lopez converted to make it 1-2 in the 74th minute. It took Malaga just one minute to restore the two-goal lead, as Fran Sol collected a pass from Alex Gallar, and somehow squeezed the ball into the net from a tight angle for 1-3. Guede’s team masterfully controlled the final minutes of the match.

“At last we have won”, enthused Malaguista striker Fran Sol after the match. “We have worked a lot, today we saw a team with an identity of what Malaga wants to be. Details have been glimpsed of what we can be this season”.

“I had to do extra work in defence that has taken away a bit of energy to attack, but in the third, I had that lucidity to score and I am very happy”, he continued, in reference to the role he played behind Ruben Castro.

“We came into this game in good shape”, he added. “It is a play that reflects the style of play that we can have against. We controlled the midfield, with a long drive, and a triangulation that has gone very well and we are very happy”, he enthused.

Looking ahead to the next match on September 4, at La Rosaleda, Fran Sol offered: “This week we are going to work intelligently and well to be able to give the fans the victory they deserve”.

“Hopefully it will be a turning point to keep improving, we are the same team with the same ambition”, added Javi Jimenez, after Malaga’s first-ever victory over CD Mirandes.