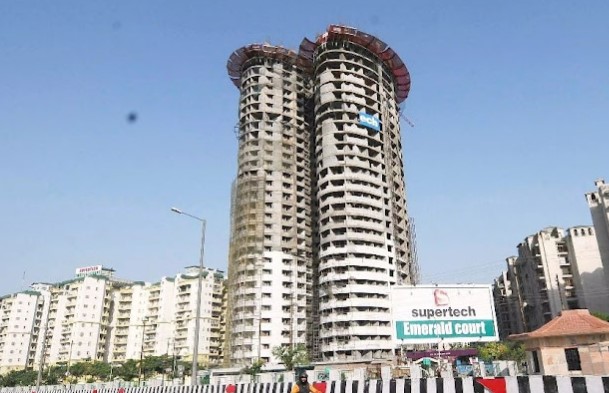 A controlled demolition near the capital city of New Delhi in India saw two illegally built skyscrapers demolished in 10 seconds.

Earlier today, Sunday, August 28, residents of homes in the immediate vicinity of two skyscrapers in the city of Noida, near New Delhi, the capital of India, were instructed to evacuate. This was because the nearby towers had been built without planning permission and were scheduled to be demolished.

Around 10 hours later, the authorities imploded both blocks, producing a massive cloud of smoke and dust as the Supertech Emerald Court complex crumpled to the ground in a controlled explosion.

Standing nearly 100-metres tall – as can be seen in the video footage – the 32-storey twin towers came down in less than 10 seconds. It is estimated that more than 3,500 kilos of explosives were used to complete the task.

Indian authorities have demolished two illegally constructed skyscrapers near the capital #NewDelhi. The nearly 100-metre tall and 32-storey twin towers were pulled down in less than 10 seconds. Thousands of people were ordered to vacate before the #demolition.#NoidaTwinTowers pic.twitter.com/1IuCGDzaeR

The two massive towers, dubbed ‘Noida’s Twin Towers’ – located in India’s northern state of Uttar Pradesh – had been the subject of a nine-year legal case to have them demolished after allegedly being erected illegally without the proper building permits. A Supreme Court order issued last year finally approved their removal.

According to thehindu.com, an exclusion zone had been established by the authorities, prohibiting the use of drones within a certain perimeter of the towers. The only ones allowed inside this zone were those with prior permission from the police.