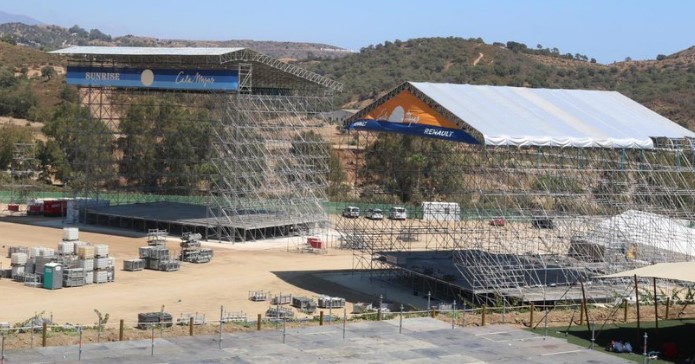 Image of the venue for the Cala Mijas International Festival. Credit: [email protected]

The organisers of the Cala Mijas International Festival have added free beach concerts to the programme from September 1 to 3 in the Malaga municipality of La Cala de Mijas.

As reported on Sunday, August 28, the organisers of the Cala Mijas International Festival have now added free concerts on the beach to the programme. The beach shows will be performed on the same dates as the main festival, from September 1 to 3, starting at 12 midday on the beach at La Playa.

They will feature a wide range of genres, including techno, punk, Latin western, neo-Flamenco, and hyperpop, as well as a selection of DJs, as reported by laopiniondemalaga.es.

As reported today, Friday, August 26, by Josele Gonzalez, the mayor of Mijas, the first edition of the Cala Mijas International Festival is almost upon us. This brand new cultural event will feature top artists, including Liam Gallagher, Nick Cave & The Bad Seed, Kraftwerk, Hot Chip, Nathy Peluso, and the Arctic Monkeys, making their only performance in Spain this year.

▪ Mijas Town Hall has designed a wide range of mobility, security, and cleaning arrangements for the three festival dayshttps://t.co/5K3P2pIsL0

The Mijas festival will run from September 1 to 3, at the at the Sonora Mijas venue, with Mr Gonzalez describing it as: “the epicentre of good music, three days where national and international artists will meet in our town in a venue of more than 150,000m² “.

“We have worked to design a comprehensive mobility, security, and cleaning plan that is up to the task of this festival”, added the mayor. He explained that: “to facilitate access to the Sonora Mijas venue we have enabled three parking lots with capacity for 5,000 vehicles at El Hipodromo, El Lagar, and Las Lagunas, with free shuttle buses to the venue and an important reinforcement of the lines of the bus service that stops at La Cala”.

This shuttle bus service will be operational non-stop and will also be available to all those attending who stay at the campsite located at the Mijas racecourse. An area with 15,000 places is being made available, with 2,000 spaces in the case of its VIP version, ‘glamping’.

Attendees who opt for public transport as a means of going to the festival have at their disposal the regular lines that connect the different nearby towns of Malaga. These include the M -119 and M-224 lines that connect Fuengirola, or the M- 220 that connects from Marbella.

In addition, Last Tour, the organiser of the festival, has arranged day trips from Malaga, Granada, Sevilla, and Torremolinos, among others. They have also organised 3-day trips from Alicante, Almeria, Caceres, Cordoba, Granada, Murcia, Madrid, Sevilla, Valladolid, Valencia and Salamanca.

As far as security is concerned, a special operation is being coordinated between the Mijas Local Police and the event’s security personnel to guarantee the well-being of the attendees, both within the festival venue and in its surroundings.

The organisers will be in charge of controlling access through searches with security surveillance personnel, while the municipal police will monitor the accesses and entrances to the area to avoid criminal acts and altercations. Theywill pay special attention to fraudulent sales and the road safety of those attending.

“The festival’s security coordination centre will be located within the venue, where security personnel, the Guardia Civil, Local Police, Fire Brigade, and health personnel will be present. We will also have a medical post in which there will be two spaces, one medical assistance room and an evolution room”, explained the Councillor for Fiestas, Tamara Vera.

Mr Gonzalez underlined how the safety of those present during the concerts “is our priority”. He highlighted that: “in an event of this magnitude, it is very important that all the parties involved are perfectly coordinated to act quickly in the event of any incident. We have been working on this with Last Tour so that there is nothing left to polish when the lights come on”.

During the concerts, there will be ambulances in the different areas of the venue, both on the main stages and an itinerant one throughout the venue. A fire appliance with a complete technical and human team will be ready for any emergency in the production area, and the camping area will also have 24-hour security and health personnel.

A purple point will be installed on the premises to provide information and support to people who may need it in a joint effort by the Council and the organisers to prevent and raise awareness against sexist attacks.

On Tuesday 30, and Wednesday 31, residents of Mijas will be able to purchase tickets from the IES La Cala, at a price of €20 per day and a voucher for €45.