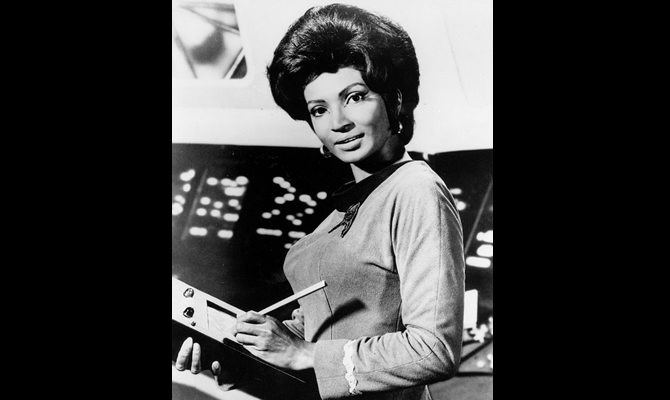 Nichelle Nichols, famous as the character of Lt. Nyota Uhura on Star Trek will have a portion of her ashes blasted into deep space onboard a Vulcan rocket later this year.

Nichelle Nichols, the ground-breaking actress who played the iconic character of Lt. Nyota Uhura on the cult television sci-fi series Star Trek, is to have her ashes blasted into space later this year. This unique tribute was announced on Thursday, August 25, by etonline.com.

On a date as yet not specified, a Vulcan (think Dr Spock) rocket will blast off from Cape Canaveral in Florida, on a mission into deep space. The ‘Enterprise Flight’ will transport a portion of Nichelle’s cremated ashes onboard.

Celestis, Inc. is the leading specialist in Memorial Spaceflights, and their spaceflight will also involve several other Star Trek legends according to the company. These will include James ‘Scotty’ Doohan, the Star Trek creator, Gene Roddenberry, and his wife Majel Barrett Roddenberry, in one form or another.

Around 200 capsules containing messages of greetings from clients worldwide, will accompany the television legends on their journey. These capsules will carry either DNA samples or ashes from each of the 200, along with similar from the Star Trek quartet. A sample of Nichelle’s son Kyle Johnson’s DNA will travel with her.

Travelling to interplanetary space, well beyond the Earth and Moon, the Enterprise Flight will reach between 150 million to 300 million km into deep space said the company’s website. Possibly going ‘where no man has been before’.

“My only regret is that I cannot share this eternal tribute standing beside my mother at the launch”, her son commented.

He added: “I know she would be profoundly honoured by this unique experience and I enthusiastically encourage all of her fans to join us vicariously by contributing their thoughts, affections, and memories of Nichelle Nichols-inspired successes, dreams, and aspirations via email to be launched with her on this flight!”.

NASA Administrator Bill Nelson described Nichelle Nichols as. “A trailblazing actress, advocate, and dear friend to NASA. After Apollo 11, Nichelle made it her mission to inspire women and people of colour to join this agency, change the face of STEM and explore the cosmos”.

“Nichelle’s mission is NASA’s mission. Today, as we work to send the first woman and first person of colour to the Moon under Artemis, NASA is guided by the legacy of Nichelle Nichols”, Nelson added.

The beloved actress passed away in July at the age of 89. Her death was confirmed at the time by her son Kyle, as well as on the official Star Trek Twitter account. Nichelle can now look forward to being able to ‘live long and prosper’ in deep space.