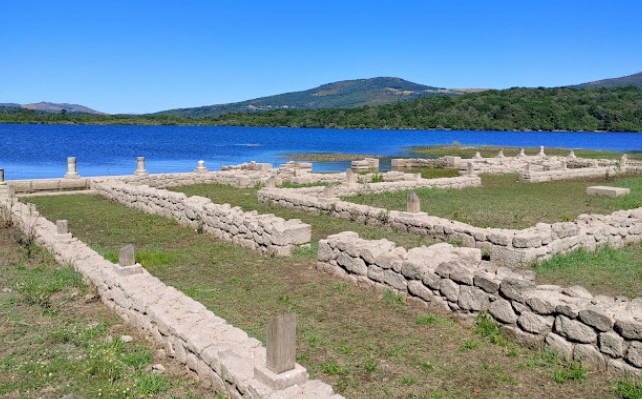 Image of the ruins of an ancient Roman base called Aquis Querquennis in Galicia, Spain. Credit: Google maps - Jesus Pardavila

A Roman military camp thought to date back to AD75 has appeared from an almost empty reservoir in Galicia, Spain.

A 2,000-year-old Roman military camp has emerged once again from an almost empty reservoir in Galicia, Spain. It is estimated by experts to have been built around AD75 and now, thanks to the awful drought conditions affecting most of Europe, this ghostly village reappeared last week, as reported by The Sun on Tuesday, August 30.

Archaeological experts have examined Aquis Querquennis through the years. They believe the ancient camp would have originally disappeared from view when the water from the Lima River flooded the area of northwest Spain, located some 330 miles from Madrid. This is not the first time it has been on show, every time the waters fall then it is revealed.

According to Atlas Obscura, the camp would have housed around 600 soldiers at a time when the Roman Empire was at its peak in Europe. The experts say that after its construction, the base was probably occupied for many decades before the army eventually deserted the region.

A drone flying over the reservoir showed the exposed ruins that had been submerged untouched for almost 2,000 years. Aerial footage of the military base shows what has been detailed to be thermal baths, a temple, a hospital, as well as barracks for the soldiers.

According to the European Drought Observatory, severe drought warnings are currently in place for at least 75 per cent of Europe after an extremely hot summer. This has led experts to wonder what other ancient sites might be revealed if the water levels fall any lower.

Here is a video of the ancient site, courtesy of @galindrone on Twitter.